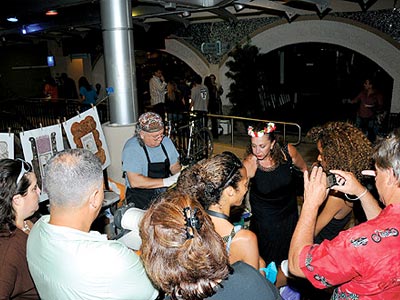 The first Saturday of every month has become an exciting event in the Coconut Grove art scene as The Coconut Grove Art Stroll on the Promenade at Mayfair has turned into a monthly destination for locals and visitors.

Director and gallery owner Johnny Valdes is enthusiastic about the Art Stroll’s success and says, “Coconut Grove is the perfect place for such an event for the fact that it is historically known for being one of the original artist Meccas in the United Sates. It is also home to The Coconut Grove Arts Festival, which is one of the largest and most successful art festivals in the country.”

Owner of two galleries in the Coco Walk area himself, Valdes is confident in the local art scene and relies on the support of a community that has responded in the best way with their “presence and word of mouth positive response,” he says. For now, The Coconut Grove Art Stroll is made possible by a number of volunteers and a few supporters that are constantly working to make next month’s event an even bigger success than the last. “Mayfair is our biggest supporter contributing to the site location and in-house marketing,” says Valdes, “we also have many kind sponsors who contribute food and drinks for the events.”

Undoubtedly a team effort, this relatively new event promises to become a constant in the Miami art scene. When I asked Valdes if he would compare The Coconut Grove Art Stroll to others like Wynwood Gallery Night, for example, he said, “Our Art Stroll On the Promenade is different in the fact that it is on private property and offers live music, dance performances and also a children’s arts and crafts area in which the kids can create and paint. All this is free including food and sampling of beverages and liquor products (21 and older of course).” Having something for the entire family is one of the things that makes this event unique and promising.

Another Grove event to look forward to be organized by the Coconut Grove Art Stroll and Mayfair is the first Thriller Night at The Grove, which will take place this October 31st, Halloween Night. The event will feature food, live music, and a Michael Jackson impersonator. This tribute to the late King of Pop will benefit Shake-A-Leg Miami, an organization that helps children and adults with physical, developmental and economic challenges. “If it is a success,” says Valdes, “we will definitely consider making Thriller Night at The Grove a yearly event!”