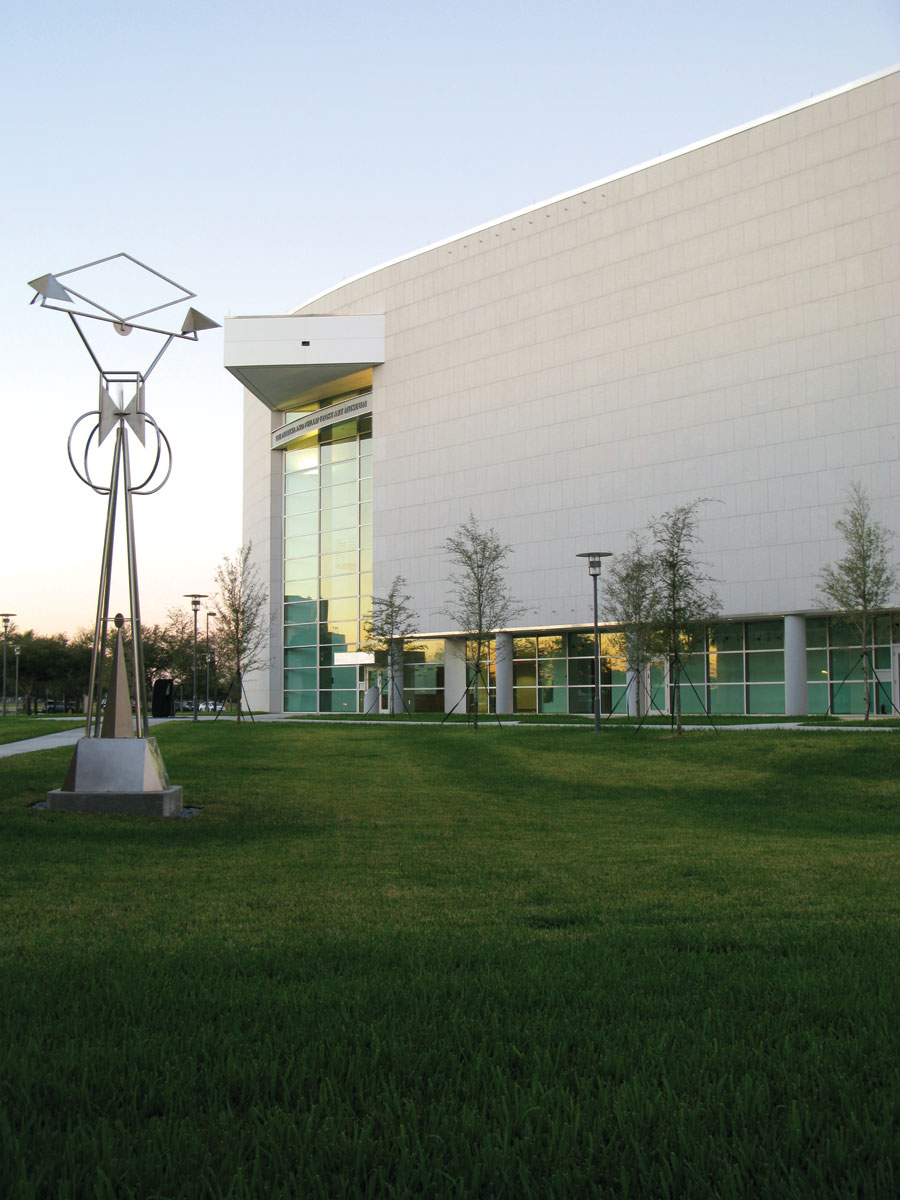 It started out thirty years ago as The Art Museum at Florida International University. This November, it is reborn as The Patricia & Phillip Frost Art Museum, a huge and hugely improved space to show off some of South Florida’s finest, most intriguing exhibits. The Frost boasts a new director and building site and will be charged with bringing a higher level of sophistication to South Florida’s art community. Unusual exhibits, programs, and events that run the gamut from celebrating America’s unique artistic vision to showcasing MFA candidates to a comprehensive lecture series will be on display in the new Frost Museum.

Dr. Carol Damian has been named the Frost’s new interim director, and she comes to this position as an author and professor with years of high standing and regard in the South Florida art community. Having stayed on top of the construction of the new building, Dr. Damian has an insider’s view as to its offerings.

“The building itself is designed by Yann Weymouth, of HOK (Hellmuth Obata + Kassabaum). And I like to describe this building as a work of art in and by itself. We enjoy having people come to visit it now before it has art in it, to see it as a work of art. It’s just beautiful! And it stands alone without art.”

The second and third floors are accessed via a soaring suspended staircase where more than 9,000 square feet of exhibition space are located. The building also has an unusual lighting system – the first ever in Florida – which eschews the usual techniques. Visual contaminants such as UV rays are filtered out, and color and light levels are strictly controlled.

“As spectacular as the building and the atrium of the building are,” says Dr. Damian, “and they are spectacular, the actual gallery spaces are beautiful, huge gallery spaces: a very, very high ceiling, a light system that he designed as petals where they diffuse the light with natural light coming from skylights. But they don’t distract from the art because they’re 20-some-odd feet up.”
There are nine galleries, three of which, the main galleries, will be dedicated to the permanent collection, while the remaining six will showcase temporary exhibitions. The first up will be the much-anticipated Modern Masters collection, showing forty-three works by thirty-one artists. Dr. Damian says it is “an amazing group of American masters mainly from the 40s, 50s, and 60s: the highlight of the New York School of American Abstraction … it is a classic American Abstract painting show.”

Part of this collection was donated by the Smithsonian Institution in Washington, D.C., and it is the first time these works are being exhibited outside of it. In 2001, the Smithsonian and FIU agreed to make many objects from the Smithsonian’s 140-million-piece collection available at FIU. This was, in fact, a university-wide agreement that included several schools of the university. “The Frost gave an extraordinary collection of masters to the Smithsonian years before we were really on the radar with a museum of this stature,” says Dr. Damian. “Virginia (Mecklenburg of the Smithsonian) has made her choices. She’s included a number of paintings that were given by the Frost. So they’re coming home!”

The University’s partnership with the Smithsonian dovetails neatly with the education-oriented thrust of the museum. As a university-based museum, enlightenment and service to the South Florida community are first among its primary endeavors.

“We were the first,” says Dr. Damian. “When the Smithsonian first thought about creating an affiliate organization in order to disseminate these works to the larger American community, the natural thing to do would be to go to small museums scattered throughout the United States and bring Smithsonian exhibitions there. Which is exactly what they did, but they invited FIU to be among the first groups affiliated as the only university-wide affiliate…. So we have research facilities that are partnered with Smithsonian research facilities for the sciences. We have a history program affiliated with the History Museum…”

The Frost Museum has at the core of its mission the need to educate audiences through the expression of the arts and to be what it calls “an exceptional resource” for high-level research, collaboration, and training. To that end, the Frost offers a large number of free programs and events, many of which revolve around the student body and its contributions. The Betty Laird Perry Emerging Artist Collection was begun with pieces purchased via the Betty Laird Perry Purchase Award, which is granted to select students. Half of the year, the museum space is dedicated to the students in the form of shows for BFA and MFA candidates.
{mospagebreak}
The museum’s former director, the art historian Dahlia Morgan, developed FIU’s Steven and Dorothea Green Critics’ Lecture Series which, since its inception in 1981, has presented internationally renowned artists, critics, and scholars who have spoken on any number of topics. There is also the Latin American and Caribbean Art Lecture Series, which illuminates the intricacies of Latin American and Caribbean art. Wednesday After-Hours focuses on alternate works of arts: those such as film, drum circles, poetry readings, and performance art. The popular program encourages the audience to learn about divergent art from non-traditional perspectives.

Dr. Damian, whose area of specialty is Latin American art, sees it this way: “This is going to be a museum that is going to offer students the opportunity to learn about a cross-cultural, multi-disciplinary, multi-media experience….I hope that we’re going to be able to give our visitors the opportunity to not only see art from not only all over the world but also to learn about art, because that is what a university museum should do.”

The Frost, in one regard, has a two-fold desire: to educate and entertain audiences across the board, but also to home in on the people in its immediate environs. FIU is located in southwest Miami-Dade County, which has a high Hispanic demographic. Unsurprisingly, 45 percent of the museum’s visitors are Hispanic. Says Dr. Damian, “I would hope to focus on the fact that we are a public institution in an area that is very underserved in the southwest Miami area, and we intend to be a part of the big Miami-Dade County picture of cultural, quality outreach. And we’re serving a part of the community that really has not been served before, down here.”

And it’s not just adults who can avail themselves to events conducted by the Frost. The Museum endeavors to reach children and teenagers also. The Kenan-Flagler Family Discover Gallery exhibits pieces that encourage hands-on activity to families with children of all ages. Its ArtSmart program for fifth-grade students makes visual arts programming available to low-income minority students. In addition, the museum has joined with Miami-Dade County Public Schools to offer free tours to students and the chance to exhibit in the annual Creative Visions Exhibition.
What the Frost Museum and FIU have taken on is a tremendous challenge: to educate while entertaining. To teach the history of art while also encouraging provocative ideas. To reach out to every possible sector of the population. And to do this in a time when funding for the arts – even those that are university-based – has never been more difficult to obtain, even from traditional sources such as the Legislature. While acknowledging the challenges inherent in her work, Dr. Damian looks forward to a wide-open future.

“It’s a really new venture,” she says. “We’re moving from a very, very small space where it was clear what we could and could not do, to a very, very large space with nine galleries. First and foremost, of course, this is a university museum, so we want it to be successful, educational, community-based, not only for the university community but for the Miami community.”