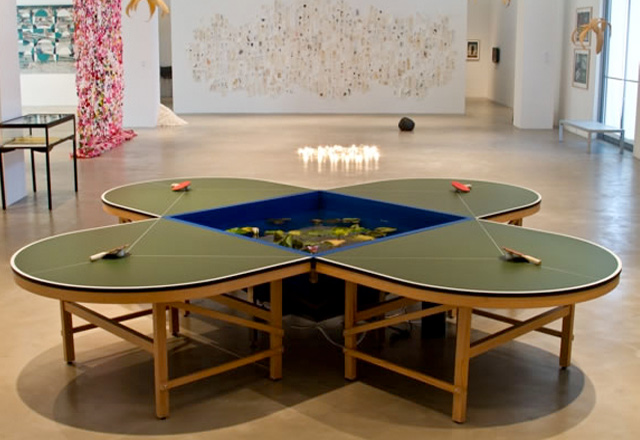 Armed with an enormous metal crossbow (seemingly lifted from the pages of feudal folklore versus an artist’s studio), using wooden 2 x 4’s as ammunition, Justin Long and Robert ‘Meatball’ Lorie invited onlookers to initiate a countdown (on one particular evening, each successive countdown was shouted out in a different language each time) until a ‘target board’ roughly 100 yards away was swiftly impaled in varying locations.

The boards were painted with figures in bright, primary colors, postured as if feigning escape from their dire circumstance; all the while, one can’t help but feel ‘is this really what I’ve come to see?’ Viewers continuously shook their heads less at the inherent absurdity of this experiment, but more as if they voluntarily sat themselves on a mini wooden bleacher and had to accept that their participation was more absurd than anything. And it is with this realization that Long and Lorie claim their victory.

Experimental performance has a steady record of illicting grumbles, condescending scoffs, even violent outbursts throughout art history’s last five decades: Carolee Schneemann, Joseph Beuys, Yves Klein and Hans Haacke are striking exemplars to this fundamental tradition. Long and Lorie touch on the forced self-awareness of the viewer with the performance in progress that was resident in these historic gestures, but also reinvigorate the audience’s self-confidence in their intellectual powers of precepts and control; in short, Long and Lorie rely as much on the feedback of their audience to fuel the action as the audience relies on their mechanical knowledge to operate the machinery, itself.

Funner Projects’ jokingly refers to itself as an affront to the stoic, often isolated ‘fourth wall’ between contemporary artworks and their audience. Does Maintain Right solve the issue? No. Does it somehow lift the experience of contemporary art into a place more enjoyable than a lecture, academic paper or a self-affecting aesthetic treatise? Absolutely. There’s no greater aim than the target boards, maybe the surrounding walls, even additional points for striking the ballsy cameraman perched near the battered walls. Long and Lorie could easily execute this halfway-asinine feat on their own, but as they would point out, where’s the fun in that? It’s the ‘Price Is Right’ atmosphere geared towards violence and destruction that delivers the critical and wit-driven engagement.