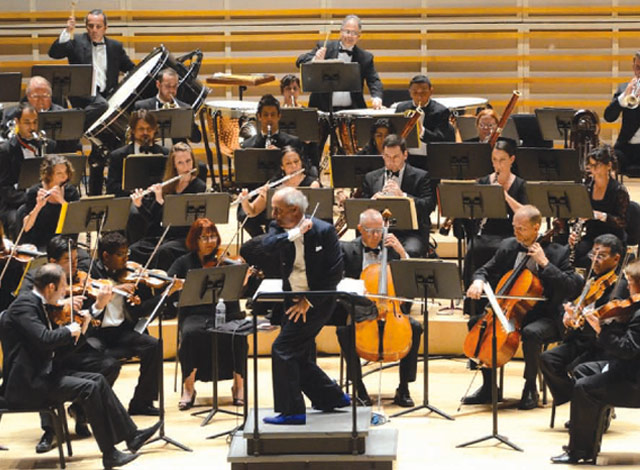 In his eighth season as Music Director and Conductor, Marturet continues his emphasis on the exploration of new music and rarely performed concertos while striving to develop a distinct voice for South Florida classical music. “MISO belongs to the community and our job is to raise the artistic level,” Marturet commented. “We look forward to presenting the ‘gift of music’ throughout this special 25th Anniversary season and for many more to share with our children, grandchildren and generations to come.”

The Orchestra’s 2013-2014 season opens Sunday, October 20, at the Adrienne Arsht Center’s Knight Concert Hall, when Marturet joins classical guitarist Angel Romero to perform a dynamic new work entitled Rincones de España, co-written by Romero and Concierto de Aranjuez composer Joaquín Rodrigo. Highlighted in this “Grand Season Opening” and other select performances throughout the season will be the blending of visual and musical arts similar to last season’s finale, as Marturet premieres his very own composition that pays homage to Cuban painter Waldo Balart.

In February, MISO will feature one of the most compelling young conductors of her generation, Alondra de la Parra, named recently as one of six “Young Artists on the Rise” by the League of American Orchestras’ Symphony magazine. Her distinctive conducting style, paired with South Florida’s own Nestor Torres and MISO Principal Horn Hector Rodriguez, makes for an energetic performance that will include works by Prokofiev, Rachmaninov, Ravel, Gershwin and a South Florida premiere of Márquez’s Danzón No. 3.

Artists and programs will be announced for two intimate Thanksgiving performances at the Adrienne Arsht Center’s Peacock Foundation Studio on Saturday, November 30, and Sunday, December 1. Other special performances for the 2013-2014 season include a “MISO for the Family” series on Saturday, January 25, at the South Miami-Dade Cultural Arts Center, and Sunday, January 26, in a free public concert in Collins Park at the Bass Museum of Art on Miami Beach.

Other highlights of The Miami Symphony Orchestra’s 2013-2014 season include:

The return of MISO’s popular annual visual/musical production of “Golden Sounds from Hollywood” in December, following last season’s phenomenal presentation of the music of John Williams.

Programs in March, April and May that center around multiple concerto soloists: