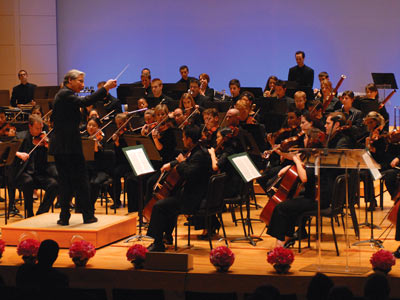 With the founding of the New World Symphony in 1987, Miami was put on the map as a city keen to encourage its young, aspiring orchestral musicians and conductors. From the very beginning, the NWS set for itself a high goal: to not only perform works from both the modern and classical repertoires but to allow ambitious musicians to study further and begin their careers. It would be a full-time teaching orchestra for young musicians. In terms of the classical repertoire, South Florida seemed to have the worst luck. Just when a new classical outlet would come upon us, other players would drop out of the equation. One was the Florida Philharmonic Orchestra, which disbanded in 2003 after years of financial troubles. A second classical outlet was the much-loved radio station WTMI, at 93.1, which was bought out in 2001. (WKCP, at 89.7, picked up the slack, but became operational only late last year.) The Florida Classical Orchestra could be enjoyed, but only at performances by the Florida Grand Opera, Miami City Ballet, and Ballet Etudes Miami. The Concert Association of South Florida offered performances of brilliant performers, but only those on tour or visiting.

Then came the New World Symphony, cofounded by the late Ted Arison, the head of Carnival Cruise Lines, and the famed conductor Michael Tilson Thomas, its artistic director, who is concurrently the music director of the San Francisco Symphony and the principal guest conductor of the London Symphony Orchestra. The main purpose behind NWS was to offer an environment where the finest young graduates of music programs, both national and international, could burnish their skills. These fellows would go on to careers in symphonies and ensembles internationally. A happy addition would be the public performances of these highly motivated grad students and the creation of new music. And still a third enjoyable component would be their community involvement.

The New World Symphony offers a rigorous three-year fellowship to its students, who are from all over the country. Tutors and conductors also are offered master classes in performance. During that time, they can participate in full-orchestra performances, smaller ensemble concerts, special recitals and festivals, and a number of different series including chamber music, new music, and a family series. Some students get the opportunity to present their own works, which gives them the experience of designing their own concerts while giving the public the chance to hear new pieces.

The inaugural concert, on February 4th, 1988, was noted by The New York Times, which praised the organization for its innovation and mentioned its early success in placing graduates. John Rockwell, The Times music critic, wrote, “The New World Symphony is full sized but confined to players between the ages of 21 and 30. The idea is that they go on to fully professional orchestras, and although the symphony gave its first formal concert only in early 1988, 33 have already done so.”

Since that time, the NWS has lept from one achievement to another. Its first New York concert was performed at Carnegie Hall, and was, Rockwell said, “…impressive in spots, a little shy of the big time in others. But it was good enough to give hope for the future – both for musical life in Miami and for this ensemble’s function as a conduit to other orchestras.” It was, in fact, an impressive showing for the nation’s first teaching orchestra. Since then, the NWS has performed in such prestigious venues as the Bastille Opera in Paris, the Teatro Colón in Buenos Aires, the Barbican Centre in London, and Avery Fisher Hall in Manhattan.

The NWS would not be limited to only live work or offering one-time-only performances. Public Broadcasting Service televised the NWS in its own 1998 documentary on the ensemble entitled “Beethoven Alive!” Performances have also been broadcast by London Weekend Television and Univision. The symphony has toured in South America, western Europe, Israel, Japan, and throughout the United States. In keeping with its desire to offer fresh new perspectives, the NWS has performed with conductors Leonard Bernstein and Sir Georg Solti while also welcoming pop sensation Gloria Estefan to center stage. Other guest artists and teachers have included Yo-Yo Ma, Vladimir Ashkenazy, Itzhak Perlman, and Yefim Bronfman.

Not content with only live performance, the NWS started recording in 1996. To date, seven albums have been recorded, and they all show the NWS’s intent to remain fresh and innovative. The first album, released in 1997, Alma Brasileira – Music Of Villa-Lobos, featured works by the Brazilian classical composer Heitor Villa-Lobos. The second album, “New World Jazz,” went 180 degrees in the opposite direction with its coverage of pieces by George Gershwin, Paul Hindemith, and Igor Stravinsky, among others. Since then, other records have featured Latin American classics, the music of Paul Schoenfield, and the works of Ingolf Dahl. Two future releases on the Argo / Decca label will include works by modernist Morton Feldman and a piano concerto by classicist Amy Beach.
{mospagebreak}
If more proof were needed as to the NWS’s success, look no further than the building of its new campus. Since its inception, the NWS has been based at Lincoln Road’s Art Deco-style Lincoln Theatre. Built in 1936, the Lincoln Theatre was simply a movie theater. It was not built as a performance space and suffered from acoustical problems and limited seating. After years of neglect, it closed in the 1980s. In 1990, the NWS started its restoration and has used it since that time. However, the orchestra has outgrown the building and now envisions a new space in the same locale. Enter Tilson Thomas’s friend, the esteemed expressionist postmodern architect Frank Gehry, the Pritzker Architecture Prize winner who designed the Guggenheim Museum in Bilbao, Spain; the Walt Disney Concert Hall in Los Angeles; and the Weisman Art Museum in Minneapolis. Groundbreaking took place January 23rd, 2008, and completion of the building, part of a Gehry-designed City Center Redevelopment Project for Miami Beach, is scheduled for 2010.

Features will include a space with 360-degree projection to allow for recording, webcasting, and performance; a music library; 26 rehearsal rooms; six ensemble rehearsal rooms; and a multi-purpose room all outfitted with Internet2 technology. There will be artist suites, changing rooms, administrative offices, and instrument lockers. The east facade will feature a glass curtain wall, allowing pedestrians, much like the setup at Miami City Ballet on Lincoln Road, a chance to see activity inside the building. A projection wall will be installed on which concerts, classes, images, and films can be viewed. All of this will cost approximately $200 million, 75 percent of which is being raised privately.

And there are many donors who want to help. This is an organization that has put community outreach in the forefront of its efforts. Some NWS students concentrate on music education and want to bring to the community, especially its children, their love of classical music and performance. To that end, the NWS offers a number of teaching programs, many of which are free of charge. They include Education Programs at the Lincoln Theatre, designed to introduce major works and composers to students and teachers in Miami-Dade and Broward; the In-School Performances / Informances, which are conducted at separate schools; In-School Coachings, which allow NWS musicians to visit schools to provide mini-lessons; the Music Mentor Program, which pairs musicians with high school students for private instruction; and the annual spring Side-By-Side concerts, where students perform with their NWS tutors.

The NWS will also offer 10 different subscription series for its 2008-2009 Season, with some seats being made available for as little as $10. For example, the Friday Evening Orchestral Series will include five performances with artists such as pianist Emanuel Ax and cellist Alisa Weilerstein. Stravinsky’s Firebird Suite and Ravel’s Rapsodie Espagnole are on the schedule. The Arsht Center Series features conductor Vladimir Ashkenazy and violinist Joshua Bell in a program that will include Saint-Saëns’s Violin Concerto No.3 and Mahler’s Symphony No.1, Titan. The closing performance features pianist Vladimir Feltsman performing Tchaikovsky under Tilson Thomas. It took Michael Tilson Thomas and Ted Arison as visionaries 20 years ago to imagine South Florida as a hotbed of culture. Thanks to their foresight and the backing of the South Florida arts community, the New World Symphony can now be credited for educating tomorrow’s visionaries.