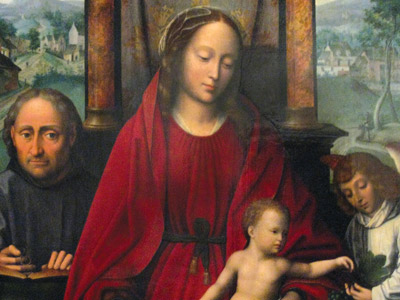 The Bass Museum of Art in Miami Beach is known for showcasing and holding important examples of Northern European Renaissance and Baroque art. Currently, the museum is exhibiting The Sacred and Sublime: Renaissance and Baroque, a show curated by Ruth Grim and displayed at the Taplin Gallery. Works on view in this exhibition span two centuries and include religious paintings by Peter Paul Rubens (1577-1640), Gerard Seghers (1591-1651), Marcellus Koffermans (active 1549-1579) and Cornelis Cornelisz van Haarlem (1562-1638).

Secular yet sublime works include the museum’s 16th Century tapestry masterpiece The Salute before the Tournament and the major Ferdinand Bol (1616-1680) painting of Venus and Adonis. Throughout the Renaissance and Baroque periods, secular themes such as the jousting competition in the tapestry and an episode from a popular ancient Greek myth in the Bol painting were common in grand art produced for wealthy patrons.

The Tournament, a signature piece of the Bass Collection, has a particularly prestigious provenance in that it was part of Henry VIII’s collection at Knole House in England. From a set of tapestries titled Tournament of Vice and Virtue (Brussels, c. 1510-20), it is a prime example of King Henry’s favorite artistic medium and was later purchased by J. Pierpont Morgan in the early twentieth-century before it came into John Bass’s collection.