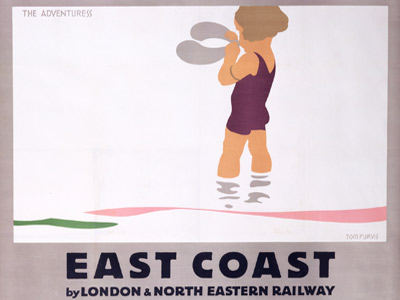 Art for All: British Posters for Transport explores the evolution of transport posters in 20th century Britain, and features outstanding examples executed for both the London Underground and the British railways. The exhibition has been organized by the Yale Center for British Art.

Art for All traces the changing graphic styles from the second decade of the twentieth century through the 1970s and highlights specific features such as the career of Edward McKnight Kauffer, the work of women artists, how the posters were initially displayed, and the larger implications of these advertising campaigns.

In 1908 under the leadership of Frank Pick, the London Underground (later, London Transport) began a promotional campaign that became one of the most successful, adventurous, and best sustained branding operations ever attempted. The posters commissioned by Pick engendered goodwill and encouraged ridership on the public transport system. They also helped to foster a civic identity for the city of London.

A string of major artists, including Edward McKnight Kauffer, Frederick Herrick, Hans Schleger, and Anna Zinkeisen worked for Pick. From 1923 – when numerous British railway companies were amalgamated into four lines until the nationalization of the railways in 1948, the “Big Four” followed Pick’s lead in mounting their own poster campaigns. While none of the British rail lines matched the scope and ambition of the Underground campaign, some of the same artists, such as Kauffer, and Walter Spradbery, also designed for the mainline railways. Other no less gifted artists, such as Tom Purvis and Frank Newbould, created extraordinary graphics for the railways.

The title of the show, Art for All, is taken from an exhibition held at the Victoria and Albert Museum in 1948 (organized by the V&A and London Transport), which featured original works of art, the maquettes for the posters. This exhibition contains the art truly seen by all: the posters themselves.