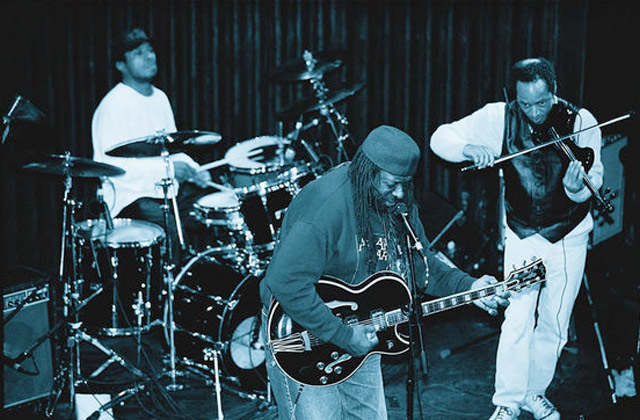 James Blood Ulmer at 70 is among the most distinctive and influential electric guitarists to arise in the past four decades. Mr. Ulmer has made a career built on left turns and reinvention. And now in the 21st century, Ulmer continues to progress as his most recent history finds him being recognized as an elder statesman of the blues. At the core, however, he remains the one and only James Blood Ulmer.

Forging an unyielding synthesis of musical styles, vision and virtuosity, Ulmer has left an indelible mark on those keen ears who’ve dared to follow him to that great nether where the fiercest, most holy music occurs. Too primitive for sophisticated jazz audiences; too funky for the four-bar blues crowd; too country for the urban funk kind; too psychedelic for straight-ahead rock fans; his audience, like many of the great artists of the 20m century, is small yet rabid, proving him a cult icon of the truest nature. As Blood once declared, “I have the same audience, it seems to me, wherever I go. I’m not hooked up to no commercial audience, but everyplace I’ve played seems to know my music.”

The first of nine children, James Blood Ulmer was born in 1940 in rural St. Matthews, South Carolina to God-fearing parents who gave him a strict Baptist upbringing. His father, a preacher at the local ministry, gave his son his first guitar at the age of four in order to prepare him for the gospel life. “My Daddy started me playing the guitar when I was four. He would be playing the upper part and have my fingers strumming, I got into it like that.” Raised on the music of the church and exposed at a young age to national touring gospel acts, including The Five Blind Boys From Alabama, The National Clouds of Joy and The Dixie Hummingbirds, it was the Lord’s music that inspired him most in the formative years. While still in elementary school he joined The Southern Sons, a vocal quartet modeled after his earliest gospel influences. He remained with the group, gigging around the south, for the next seven years.

While gospel may have sparked Blood’s passion for music, the flames quickly spread as he discovered new sounds and styles. On the radio, early rock & roll, country & western and blues reigned, and Blood loved it. Mornings, while dressing for school, he often tuned into a show that featured Chuck Berry’s “School Days” as its theme. The blues, however, was a different story. It was alternately alluring and frightening, a struggle for him that still exists to this day. Viewed as the devil’s music by his parents, he’d often have to sneak the music behind their back. “This here’s the music that got me thrown out of the house by my mamma,” remembers Blood. “I broke every law in the book to listen to some blues. She used to beat my butt if I want to do a blues straight out: ‘Oh, Ba-by take me down, down.’ We came from the church. We couldn’t play no stuff like that.”

With a growing fascination for the big city and a desire to explore the world on his own terms, Blood set out north for Pittsburgh at the age of 17, moving in with his mother’s cousin. Within the space of a year, his vocation was sealed, as he began accompanying an assortment of doo-wop groups, including The Savoys, and even toured on a Dick Clark sponsored “Caravan of the Stars,” backing the Del Vikings of “Come Go With Me” fame.

In addition to the invaluable experience as full-time working musician, Pittsburgh also exposed Ulmer to a juke joint scene where funky organ-tenor combos played deep into the night. It wasn’t long before Blood was sitting in with the likes of Richard “Groove” Holmes and Jimmy Smith. By ’65, Blood yearned to dive headlong into jazz and follow in the footsteps of his hero, gnuitarist Wes Montgomery. By 1967, a great wave of progressive black music was at its crest, spearheaded by such musicians as Yusef Lateef, Archie Shepp and Pharoah Sanders, he moved to Detroit, where his experimental side developed in a cooperative jazz group called Focus Novii, while he continued to work trio gigs at Detroit’s 20 Grand Club. The other house band of this legendary club was none other than Funkadelic.

In 1971, James Blood Ulmer’s career took a dramatic turn when he headed to New York City and met the legendary avant-garde jazz saxophonist Ornette Coleman. The association would lead to a stint in Coleman’s revolutionary group, as well as collaborations with a colossal lot of groundbreaking, experimental musicians: Roshied Ali, Larry Young, Joe Henderson, Paul Bley and Arthur Blythe, to name but a few. The seeds were sown for the ’70s loft jazz scene, a movement named after the large, then uninhabited, SOHO loft spaces where jazz musicians had gravitated for cheap rent and the ability to play all hours of the day and night without being disturbed.

By the early 1980’s, critics were touting him the hottest new thing on the scene and fans packing his New York City performances. Blood’s career was growing in leaps and bounds. The British record label Rough Trade offered Ulmer a record deal with the intention of crossing him over to rock audiences. He accepted and went right back into the studio to record Are You Glad To Be In America?, a frentic concoction of free funk and jazz that pushed the concept of harmolodic guitar towards previously unimagined frontiers, while introducing his guttural Howlin’ Wolf-inspired vocals into the mix. On the success of this record, Ulmer found himself being compared to the likes of Jimi Hendrix, and began landing gigs at popular New York City rock clubs.”

His 1983 recording Odyssey, with violinist Charles Burnham and drummer Warren Benbow, delivered an album of visceral, raw emotion that went straight to the depths of deepest, darkest Africa, while simultaneously traversing the American music landscape. Blues, jazz, funk, country and freeform noise spilled over in dense musical themes and sonic structures. “Odyssey” is considered by many as a peak moment in American music daring.

In 2001, Living Colour guitarist, Vernon Reid convinced Ulmer to record an album of blues standards that put his guitar playing on the backburner in favor of concentrating on his vocals. Recorded at the legendary Sun Studio in Memphis, the album entitled, Memphis Blood: The Sun Sessions, became Blood’s most successful of the last decade, reawakening fans and critics alike to the power and electricity James Blood Ulmer is capable of summoning, including a Grammy Award-nomination for “Best Traditional Blues Album.” in 2003, he released, No Escape From The Blues: The Electric Lady Sessions, which takes the concept Reid began one step further, this time following the blues migration north to New York City to record at the fabled Electric Lady Studios that Hendrix founded three decades earlier.

In 2005, James Blood Ulmer reinvented himself once again with Birthright, his first ever solo album. Captured alone on vocals and guitar featuring nearly all original compositions, it is his most stark, personal and iconoclastic album to date. On songs like “Geechee Joe,” “Take My Music Back To The Church” and “White Man’s Jail,” Ulmer deals directly with the proverbial hellhounds on his trail, including religion, racism and failed relationships. The results were riveting. Guitar Player magazine called it “A groundbreaking performance with roots that go back to Africa and beyond!”

For the November 17 Tigertail concert, Blood’s trio will include violinist Charles Burnham and drummer Warren Benbow, who accompanied him on Odyssey in 1983.