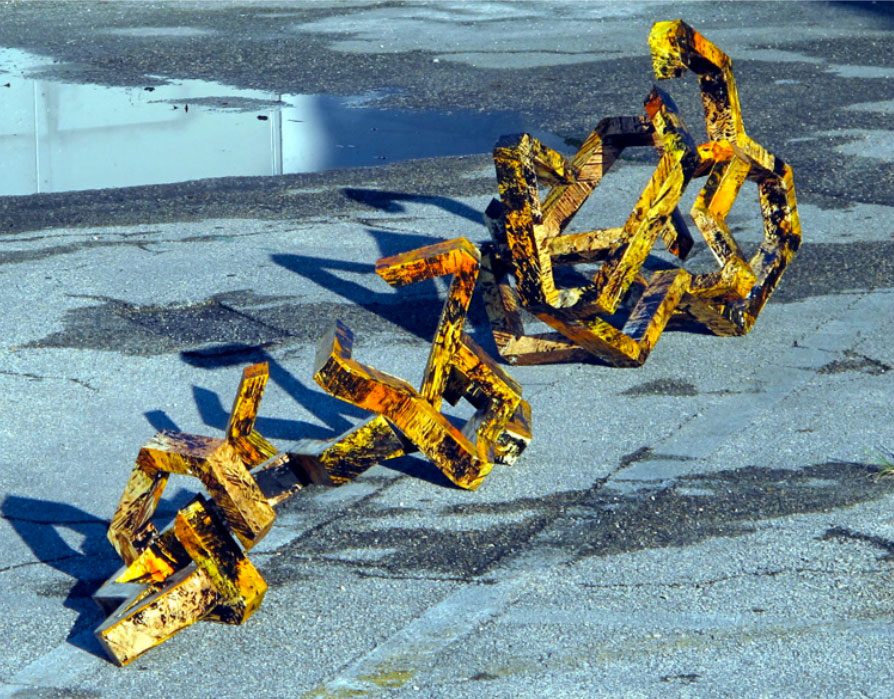 Describing a body of work from Miami-based artist Jorge Enrique is both a paradoxical and technically accurate exercise. Architecture is geared towards a slew of metaphoric tasks: a basic shelter, a functional work or play space, a haven for hermetic ritual, a temple for learning, or maybe a mere freestanding aesthetic experiment. The variances of architecture are, by their nature, reflections of the same kind of spontaneous, organic innovations often experienced by painters, dancers, musicians, and stage actors. In other words, architecture is seldom a cold, methodical series of calculations, measurements, numbers, permits, and ownership claims. But Enrique’s work is neither an adherence to strict principles of sound logic, nor an embrace of a recent class of architectural bodies meant to mimic "natural" or "organic" elements

Throughout Enrique’s body of work, he has absorbed the diverse external and internal spaces of the multi-colored metropolis he inhabits and translated the experience of urban construction and deconstructions into his pieces. In Howl, he engages angular gestures with more muted surface qualities than in his previous series. The lacquer coatings are gone, dark umber and soot black tones dominate the compositional planes versus yellows and primary blues, and the lack of such layered materials as found in his works from 2000 to 2012 are, ironically, more tangible. The sculptures of this series resemble bent lines, zigzagging through the air, and present a direct challenge to conventional architectures. Both anti-organic and anti-architectural structures, they are investigations into radicalized geometry; angles and permutations of linear space becoming less concrete constructions in non-linear space.

Jorge Enrique was born in Havana in 1960. He began his academic studies in Studio Art at the Alfred C. Glassell Jr. School of Art at the Museum of Fine Arts, Houston. Solo exhibitions of his work have been exhibited in Paris, New York, Houston, and Miami. Enrique’s works have been shown at the Villa Datris Foundation in L’Isle-sur-la-Sorgue (France), L’Institut Culturel Bernard Magrez in Bordeaux, Locust Projects (Miami), the Lawndale Art Annex (Houston), and the Coca-Cola Corporation Headquarters in Atlanta. Enrique lives and works in Miami.