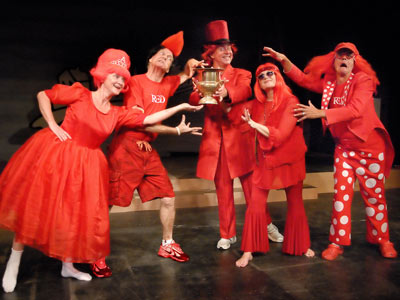 The Waterfront Playhouse presents The Red Head Dilemma, an interactive children’s musical for ages 6 to 12 that has been created by the Key West Children’s Theatre Company. The Red Head Dilemma plays Saturday mornings at 11:00 a.m., on November 15th, 22nd and 29th, 2008.

The Red Head Dilemma invites children to join the imaginary society of the people of Red Head City as honorary citizens. From the madcap court of Mayor Ruby Red Crimson, the children are divided into four sections and join forces with the zany Charlotte Scarlet, Merlin Magenta, Roger Redbone and Rosa Redfern, all obsessed with the color red. When a stranger, who is not a Red Head, wants to move into Red Head City, the One Human Family themed production forces the Red Head Citizens to examine their own prejudices. The children take to the stage and help to determine the action and the stranger's fate and in doing so learn a valuable lesson about racism and equality.