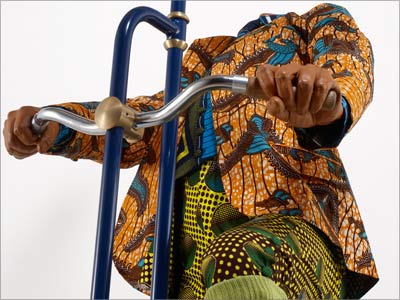 As part of its ongoing New Work series, Miami Art Museum will present Yinka Shonibare, MBE: A Flying Machine for Every Man, Woman and Child, a new installation created specifically for MAM. The site-specific work will explore Miami’s role as a destination for both tourists and immigrants and as a symbol of freedom and promise.

Born in Britain to Nigerian parents, Yinka Shonibare is best known for his installations and photographs that juxtapose African and European imagery, often modeling his compositions on canonized works from Western art history. The artist’s installations frequently include headless, anonymous mannequins dressed in elaborate Victorian fashions. These stunning costumes are made of batik fabrics like those first sold to Africans by Dutch traders in the 19th Century. Though they are manufactured in Britain and the Netherlands, these brightly-colored printed textiles remain strongly associated with Africa. Shonibare references this common misattribution in examining the larger cultural misconceptions and mythologies of colonialism.

The installation at MAM will feature an idealized nuclear family clothed in Shonibare’s wax-printed attire, each straddling a human-powered flying machine modeled after 19th century drawings. "A Flying Machine for Every Man, Woman and Child re-imagines the aspiration of flying, and by extension the dreams and promises that Miami has come to represent," writes Shonibare. "The attempt at flying against all odds is a metaphor for the monumental efforts made by some of the inhabitants of Miami to reach a city which represents the promise of America."   The work also evokes the flights taken to Miami by millions of tourists seeking glamour and entertainment. Seeming to pre-date modern air travel, Shonibare’s machines symbolize the freedom sought by emigrants and tourists alike.