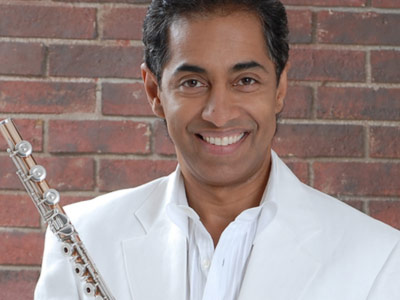 Ten years after the tragedy of 9/11, Nestor Torres creates a concert event of a lifetime in a symphonic version of songs from his CD “Dances, Prayers and Meditations for Peace. The concert will take place on Friday, November 11 at 8:00 p.m. at South Miami-Dade Cultural Arts Center. It will include a music and dance performance directed by Daniel Lewis (department Dean Laureate the New World School Of The Arts) and choreographed by Lara Murphy (Adjunct Professor of Dance at New World School of the Arts).

The event will feature the Greater Miami Youth Symphony, the Miami Children’s Chorus, New World School Of The Arts and the Thomas Armour Dance Conservatory. There will also be a special appearance by the musical group Brazilian Voices. A total of 200 young people from ages 8-22 will be participating, sharing the stage with Torres and a select group of master musicians, singers and dancers.

There are two pillars that make up the thematic framework of the concert. Torres was inspired by 9/11 and also equally inspired by a presentation he was asked to give in the presence of the Dalai Lama.

September 11, 2001 was supposed to be an exciting day for Torres. The Latin Grammy Awards were scheduled to be presented in Los Angeles with Torres as a nominee. The event was cancelled, but Torres ended up winning a Grammy. Against the backdrop of such tragedy came inspiration.

“Three people I knew had died in the attack. I felt the urge to go to New York City and play in different houses of worship. It was my intention to be a conduit for whatever energy was prevalent in the City at the time, and channel it as music that could transform grief to acceptance, anger to courage, and despair to hope. From those improvisations emerged seven of the songs to be performed at the Concert on November 11, said Torres”

The Academy of St Martin in the Fields is noted internationally for its refined sound, rooted in outstanding musicianship. It was formed by Sir Neville Marriner in 1958 with a group of London musicians who … +

Symphony of the America... +

Broward’s longest running Summerfest is back, presenting its 26th annual festival, for one month of performances throughout Florida and the Americas. Nourish your artistic soul with the Symphony of the Americas, a Broward County designated … +