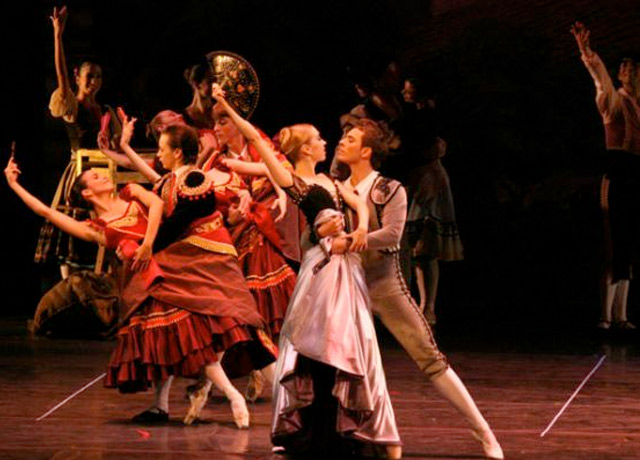 Every spring they come back to Miami to dance together. Cuban classical dancers so exceptional that a few years back Time Magazine devoted an article to them entitled: “Psst! The Cubans Are Coming! Latin Ballet Dancers are storming the stage creating a revolution of Russian proportions.”

Rolando Sarabia, likened by many to a young Baryshnikov, will be dancing. So will Lorna Feijoo and Nelson Madrigal, principal dancers at the Boston Ballet Company, and Hayna Gutierrez, principal dancer of Canada’s Alberto Ballet. All of them have come together to perform at the Fillmore at the Jackie Gleason this weekend.

They are here at the invitation of another Cuban dancer Pedro Pablo Peña. He had dreamed for years of bringing together those who once graced the stages of El Teatro Colon in Havana, those who had matured in Cuba under the watchful eye of George Balanchine’s favorite, Alicia Alonso, she who taught the maestro something about the expressiveness native to Cuban dancers.

“I knew just how extraordinary Cuban dancing was, especially at this time when so many great American and European dancers have been trained towards the cool end of the emotional spectrum,” says Peña. “I knew how much audiences anywhere, but especially audiences in Miami, would appreciate this dancing. But I also wanted to create an opportunity for Cuban dancers to once again experience each other and their roots full strength.”

It was six years ago that Peña actualized this dream, giving the gathering he had wished for a name: Cuban Classical Ballet of Miami. A 2006 Miami premier was sold out, and so it has been each year ever after.

This year, in a tribute to those Cuban roots, the dancers will present a program entitled “Spanish Classical Night,” a pastiche of the favorites of classical Spanish repertoire including “Carmen Suite,” “ Don Quixote” and “Paquita Pas de Deux,” among a handful of others. Peña and his dancers have set out to explore the relationship between Spanish dance, especially the Bolero School from the 19th and 20th century and its classical counterparts.

If all this wasn’t promising enough, Spanish bolero/flamenco legend Lola Greco will take her place alongside her Cuban counterparts.

Still, this weekend’s performances and the annual performances of Cuban Classical Ballet of Miami are only part of what Pedro Pablo Peña has brought to Miami.

A dancer and choreographer held in considerable esteem by the dance community in Havana, he came to Miami with his family as part of the Mariel boatlift in 1980. Peña may have been one more exile wrestling with survival, still he realized for him that meant dance. He gave classes here and there. He searched for rehearsal space.

It wasn’t easy; it was a long decade after he first conceived the project, but in 1995 the first International Ballet Festival was inaugurated in Miami. This festival, his festival, now 17 years old, one which prides itself on its diversity of dance — last year stars from India and Europe were in residence, as well as those from Brazil and the Caribbean – will be presented in Miami from August 31 to September 16 of this year.