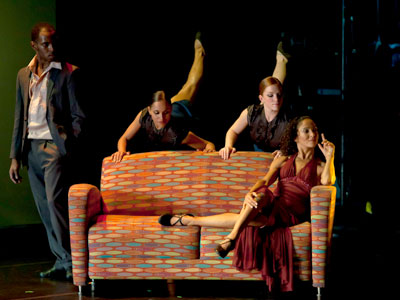 Strength may be the foundation of well-executed dance, but without character, the beauty of dance can still be elusive.

Dance Now! Ensemble’s evening of new work which took the stage last weekend at Lincoln Road’s Colony Theatre offered audience members technical skill as well as an enticing display of theatrical versatility. The six-member troupe performed guest choreographer Tandy Beal’s more abstract choreography with precision and verve. An excerpt from Beal’s The Time Falling Bodies Take to Light featured dynamic partnering. Solo appearances by Diego Salterini in Heisenberg’s Principle and Colleen Farnum in Mysterious Barricades added a sense of whimsy and comedy to the first half of the evening.

But the evening’s strongest work was created by DNE co-founders and artistic directors Hannah Baumgarten and Diego Salterini, beginning with Baumgarten’s Pulverized Habitat. In this steamy pas de deux, Justin O’Ferrall and Megan Holsinger stalk each other with an almost feline prowess. Holsinger’s extensions are elongated by clean pointe work and O’Ferrall’s powerful lifts. Her feet and hips occasionally jut out, tattooing the choreography’s more elegant lines with a modern quirkiness.

Dariel Milan and Cristiane Silva vividly expose the intimate moments that connect and disconnect a couple in Three Moments in Time, a series of vignettes about a decade-long relationship. In the third part of the trio, 10th Anniversary, Milan and Silva work skillfully around a table and two chairs. Balancing and climbing around and over one another, they render a humorous and poignant portrait of a love well lived.

DNE’s troupe possesses skill and stamina (the six dancers were going full throttle the entire evening), but they also really seem to love dancing together. Trust and camaraderie allow performers to take risks and Six Characters, the evening’s show stopper, is theatrically gutsy. Baumgarten and Salterini’s premiere is based on the 1920’s play of the same title by Pirandello. DNE’s version depicts a volatile love triangle: Silva plays a diva whose husband/manager (O’Farrell) is seduced by a sexy stranger portrayed by Milan.

The sexual magnetism and dramatic depth of the male partnering in Six Characters is riveting. Milan’s character is emotionally distant and mercurial but powerfully seductive. O’Farrell’s impressive leaps and back extensions reveal a raw masculinity, but his strong sense of character conveys the complexity of his love for his wife and his desire for the stranger. DeVaughn McGann’s skillful leaps and turns in the shadows lend an air of mystery to the performance.

Rounding off an evening where she displays an impressive range of movement and emotion, Cristiane Silva exudes grace, vitality, and melancholy in her ethereal solos and sumptuous duets with O’Farrell. Portraying Silva’s secretaries, Holsinger and the expressive Cherilyn Marocco bring a sense of Greek Chorus to this tragedy as they flutter about, fussing over their mistress.  The original score composed by guitarist Federico Bonacossa, imbues Six Characters with drama and period ambience of the 20’s. Classical guitarists Bonacossa and Allan Nguyen establish a baseline of melodic loops a la Piazzolla, while the esteemed violinist Federico Britos’ violin crafts emotional highs and lows.

Six Characters is carnal and courageous. Kudos to DNE for creating a work that lets dancers stretch their theatrical capabilities.