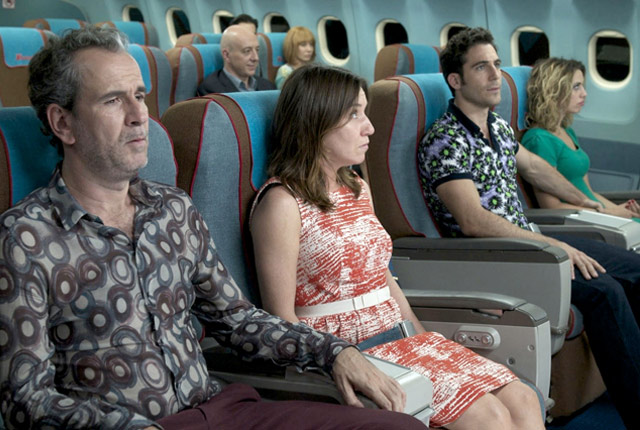 The biggest hit ever at the Coral Gables Art Cinema, I’m So Excited! (Los amantes pasajeros) has been held over through August 8, continuing its Exclusive Miami First Run Engagement at the Coral Gables Art Cinema. Directed by oscar-winning director Pedro Almodóvar (Talk To Her, The Skin I Live In) and starring a who’s who of Spanish-language cinema’s most well known actors – including Antonio Banderas, Penélope Cruz, Javier Cámara, Cecilia Roth and Paz Vega, among others – the film tells the story of a Madrid to Mexico airplane flight that is facing complete mechanical failure. Harking back to Almodóvar’s earlier period of zany and off-beat comedies, I’m So Excited! is the director at his most crowd-pleasingly playful. Also, the late-night series Gables After Hours continues with screenings of I’m So Excited on Friday and Saturday, August 3 and August 4, at 11:15 pm. Gables After Hours showcases an eclectic mix of films ranging from the strange, sexy, horrific, beautiful and offbeat.

In I’m So Excited! the flight attendants and crew confront the possibility of a fatal plane crash by trying to forget their own personal problems, and instead devote themselves, body (literally), and soul, to their passengers. The cast of characters includes three campy lip-synching flight attendants, a straight-laced captain, one dashing co-pilot, a clairvoyant virgin, a drug-smuggling groom and a sharp-tongued madame. Life in the clouds is as complicated as it is on the ground for the diverse, crazy, sex and death-obsessed typically Almodóvar group of people thrown together on the endangered plane. Variety raves that I’m So Excited! is, “A hugely entertaining, feelgood celebration.”