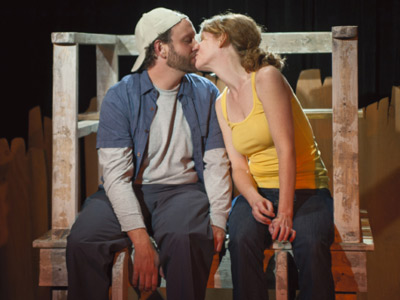 Following the record-breaking run of The Irish Curse, Award Winning Mosaic Theatre presents Stephen Belber’s “Dusk Rings a Bell” featuring a member of “Chicago’s Elite 8,” Jenny McKnight in the lead role of Molly in the first production of this play outside of New York.

Molly and Ray unexpectedly meet 25 years after a one-afternoon adolescent fling. She has a successful media career; he owns a small landscaping business. Both begin to romanticize their chance reunion, but a renewed connection is disrupted when their encounter reveals two vastly different paths taken and two lonely souls attempting to reclaim a moment of possibility, when they were young and perhaps at their very best.

Jenny McKnight (Molly) is a Florida native, and is very happy to return to the Sunshine State to work on this lovely play. After earning an MFA at The University of Alabama, Jenny moved to Chicago, where she has been fortunate to appear in Talking Pictures and The Actor at the Goodman Theatre; Pride and Prejudice at Northlight Theatre; Old Times at Remy Bumppo Theatre; Frozen, The Laramie Project and The Incident at Next Theatre; Ariadne’s Thread at Victory Gardens Theatre, Three Tall Women at Apple Tree Theatre, multiple shows with Eclipse Theatre, where she was a company member; as well as work with Steppenwolf Theatre, Redmoon Theater, Chicago Dramatists and others. Regionally in the Midwest, Jenny has been seen in Crime and Punishment, Pride and Prejudice, Painting Churches and The Turn of the Screw at Indiana Repertory Theatre; Speaking In Tongues and All My Sons at Milwaukee Repertory Theatre; and Liliom at Kansas City Repertory Theatre.

Gregg Weiner (Ray) is happy to return to his Mosaic family after a successful run of August: Osage County at Actors Playhouse in Coral Gables. This season he has been lucky to be so busy: Clybourne Park (Caldwell), Cane (Florida Stage) and Fifty Words (Gablestage). Last time Gregg appeared at Mosaic was in last season’s Groundswell. Gregg has been honored with 4 Carbonells (two individual – and two ensemble). He was also named New Times Best of 2010 Broward Palm Beach as well as a Silver Palm Award for his work in the 2009 season. Next up for Gregg is Summer Shorts with City Theatre. TV and film credits include – It’s Always Sunny in Philadelphia and on the screen in Transporter 2 as well as commercials and voice over work. Gregg is an NWSA alumni and a proud member of Actors Equity Association.