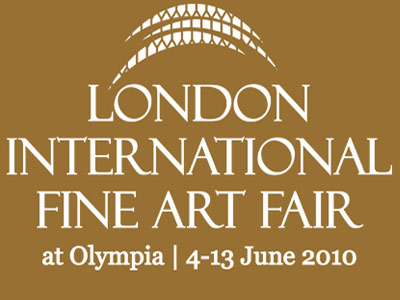 IFAE fair principals, David and Lee Ann Lester, along with Clarion Events, have outlined new plans and have come up with innovative ideas for the London International Fine Art Fair at Olympia (LIFAF) for June 4th through 13th, 2010.

The watchword of the fair this year will be “quality” which will be expected from every dealer at every level including display of artwork, antiques, stand design, lighting, and proper description and identification of each object. This fair will represent itself as a place where rare and valuable objects are sold – and the fair environment must reflect that essence.

“We have created an entirely new design for the fair,” said David Lester of IFAE, who will now provide executive management for the event. “We have eliminated the ‘free build concept,’ which we recognize was undoubtedly helpful in moving the fair forward in prior years. Our feeling was that this created a ‘two tier’ concept of exhibitors on the main floor and we wish to create a more even ‘playing field’ in the future. It seems important to us that all dealers have equal prominence and visitor exposure.”

Increasing qualified attendance will be Lester’s first priority. Advertising and promotion will be significantly increased from prior years. Dealers – as well as the fair organizers  – will be called upon to play an increasingly active role.

Another new feature at LIFAF is the “Buyer’s Assurance Plan” where every purchase at the fair will be guaranteed for authenticity by a major international insurer. This adds a unique and reassuring standard to LIFAF and sets it part from any other fair. IFAE and Clarion Events have already received written confirmation from major International insurance companies who will act as the insurers of record for all sales.

Response from the dealer communities in London, Europe, and the US has been almost uniformly favorable to date. In spite of the current economic challenges, IFAE and Clarion Events expect the June 2010 fair to fill quickly and develop a long waiting list. The current new floor plan and application is available on their website.