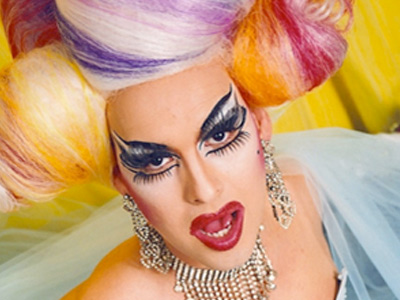 Gender-bending, great music, lots of laughs and some powerful takes on history and sexual identity are all part of the upcoming A Taste of Out in the Tropics Gay, Lesbian, Bisexual and Transgender (GLBT) performing arts showcase.

The event begins at 10:00 p.m. and continues on past midnight on Saturday, November 7th, 2009 at the Colony Theatre in Miami Beach. A Taste of Out in the Tropics is part of the annual Sleepless Night event, a vibrant free indoor and outdoor cultural festival spread out over multiple locations throughout Miami Beach on the 13-hour night that marks the end of Daylight Savings Time. A Taste of Out in the Tropics is a presentation of Robert Rosenberg/Tropical Wave Productions, in association with FUNDarte and MiamiARTzine.com.

A Taste of Out in the Tropics’ featured performer is the women-led pop-rock group Betty, whose hilarious and always fresh musical performances and theater work have made them popular worldwide. They are well known for their music for the groundbreaking Showtime lesbian series The L Word, including the racy theme song, as well as their Off-Broadway show Betty Rules.

A great line-up of local GLBT artists will open A Taste of Out in the Tropics with brief sets from 10:00 to 11:30 pm. The M.C. for the night will be Adora, South Florida’s infamous gender illusionist known for his spot-on comedy and lip-synching in both English and Spanish. Juan Carlos Zaldivar will appear in his Martí and I, a mixed-media piece that blends video and live performance. Drag It Out will present their female-to-male “drag king” show that is sure to entertain audience members of all persuasions. And finally, the evening will be rounded out with a performance from an ensemble of the always-popular Miami Gay Men’s Chorus.

A Taste of Out in the Tropics is a preview of what will be South Florida’s first full-fledged gay contemporary performing arts festival, Out in the Tropics, coming to Miami in July 2010. The festival will present award-winning, cutting-edge GLBT performing artists from around the country who address broad gender and social issues, for an extended weekend of shows and other events. “We are so excited to launch this new Out in the Tropics project by participating in Sleepless Night this year,” says Out in the Tropics Artistic Director Robert Rosenberg. “Our intent is to create a gay and lesbian signature event that can have both a local and national profile while exposing South Florida audiences to new and exciting work that rarely if ever gets presented in the region.” Admission to A Taste of Out in the Tropics is free, with no reservations required, as is the case for all Sleepless Night events.

A Taste of Out in the Tropics at the Colony Theater
1040 Lincoln Road
Miami Beach, FL 33139
www.fundarte.us

The annual Breakfast in the Park is an official Art Basel Miami Beach event. Each year since 2004, the Patricia & Phillip Frost Art Museum has welcomed guests to enjoy a complimentary breakfast, a lecture … +