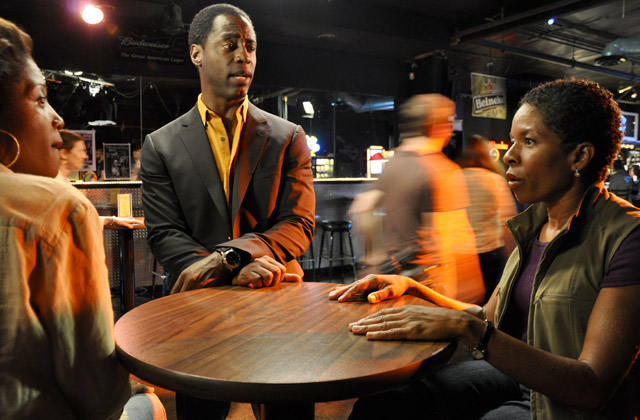 John Sayles, the dean of American indie filmmakers and a two-time Academy Award nominee, brings his latest movie, Go For Sisters, to the Coral Gables Art Cinema for its exclusive South Florida premiere run beginning Friday, December 13.  LisaGay Hamilton and Yolonda Ross star as two long estranged childhood friends who make their way down to Mexico in search of Hamilton’s on the lam son, along with a tough-as-nails ex-cop played by iconic Latino actor Edward James Olmos. As much a fascinating character study as it is nominally a thriller, it has just been nominated for an Independent Spirit Award (the art house version of the Oscars).

In Go For Sisters, one woman, played by Ross, is a recovering drug addict whose life went on a downward spiral. The other, played by Hamilton, finds herself face to face again with her old friend, after twenty years apart, but now as her parole officer. When Hamilton’s adult son goes missing, the two become involved in a search that takes them first to Olmos’ front door, and then across the border. Go For Sisters is an intimately scaled mystery that tackles big issues and themes: illegal immigration, Black women’s friendships, Mexican and Chicano identity, and family ties that bind and constrain. The Los Angeles Times says, “Olmos’ delectable hamminess and Hamilton’s unfussy performance convey volumes. Ross, guarded and resilient, is a revelation.”

Tickets are $11.50 for all screenings, and under and are available for purchase at the box office and on the Cinema’s website at www.gablescinema.com.

Deserving comparison with the work of Pedro Costa, Andrei Tarkovsky, and Souleymane Cissé, This Is Not a Burial, It’s a Resurrection marks the introduction of a major filmmaker and the final powerhouse performance of a remarkable actress. The late Mary Twala Mhlongo, recognizable from Beyoncé’s blockbuster musical Black Is King, gives a heartbreaking career-capping performance as Mantoa, an 80-year-old woman who has … +

After toiling for years in bit-parts, aspiring actress Nina Wu (Ke-Xi Wu, who also co-wrote the script based on her own personal experiences) finally gets her big break with a leading role in a spy thriller set in the 1960s. The part, which calls for nudity and explicit sex scenes, is made all the more challenging thanks to the director’s unending belittlements. … +

“[Colin Firth and Stanley Tucci] are on magnificent form in a drama about love and mortality that is all the more powerful for its restraint.” —Peter Bradshaw, The Guardian Sam (Colin Firth) and Tusker (Stanley Tucci), partners of twenty years, are travelling across England in their old campervan visiting friends, family and places from their past. Following a life-changing diagnosis, their time … +