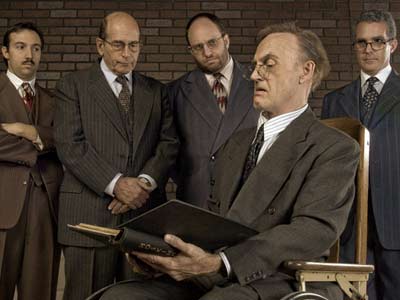 GableStage at the Biltmore presents the Southeastern Premiere of the play The Accomplices by Bernard Weinraub. Longtime journalist for the New York Times and playwright Bernard Weinraub dramatizes how the American government, media, and even American Jewish officials, fearing a backlash of anti-Semitism at home, failed to act decisively enough to stop the World War II massacre of European Jews. This sorry period of apology for American inaction is now the subject of this morality thriller about grassroots activism and back-room politics in the deepening shadow of Nazi genocide. It is a bracing reminder of the complicity of silence with mass-murder.

The play will be directed by GableStage’s Producing Artistic Director, Joseph Adler. The large cast, including many actors who have previously been seen at GableStage, is comprised of Ursula Cataan, Howard Elfman, Scott Genn, Joel Kolker, Wayne LeGette, John Manzelli, Jessica K. Peterson, Kevin Reilly and Gregg Weiner. The playwright, Bernard Weinraub, will be present on Opening Night and will lead a discussion immediately following the 2:00 p.m. performance on Sunday, April 27th, 2008. The theater is located at the Biltmore Hotel, 1200 Anastasia Avenue in Coral Gables.