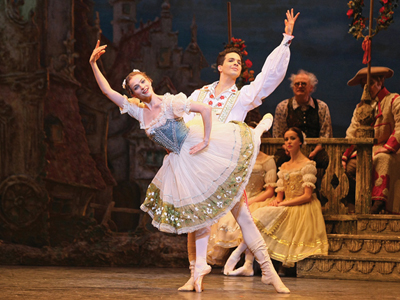 The city of Miami is no stranger to Cuban heritage – and that’s an understatement, to say the least – the home of The Freedom Tower in downtown Miami, the famous Calle Ocho and Viernes Culturales, and what Miamian doesn’t enjoy a cortadito after lunch? Yes, these are staples of the Cuban community of South Florida, but Choreographer and Artistic Director Pedro Pablo Peña shows us that there is so much more.
Originally from Cuba, where he completed a great part of his ballet training, Peña, the recipient of many awards, has been most recognized for his continuous work in the progress of dance in Miami and the preservation of Cuban Heritage. Peña’s undeniable talent and skill has taken him through the world of professional dance and choreography, working for several years in the television and film industry, and founding the Creation Art Center (1982), the Miami Hispanic Ballet (1993), the International Ballet Festival of Miami, and in 2006, The Cuban Classical Ballet of Miami.

The company, with a focus on showcasing the heart of classical ballet, strives for national and international acclaim through its high technical standards, artistic integrity and strong commitment to presenting the most beautiful ballets.

Peña’s most recent contribution to our city was his presentation of La Fille Mal Gardee at The Fillmore Miami Beach, performed by The Cuban Classical Ballet and exquisite principal dancers Lorena Feijoo with Rolando Sarabia, and Fernanda Oliveira with Arionel Vargas, in the notable company of Jesús Sanfiel and Walter Gutiérrez. La Fille Mal Gardee tells the all too familiar story of a girl in love, but promised by her widowed mother to another man; in this case, Lise (Feijoo/ Oliveira) is in love with her handsome young neighbor Colas (Sarabia/ Vargas). The two own the stage, ever so smitten, while Lise’s widowed mother, Simone (Sanfiel), does everything in her power to keep them apart as she has arranged Lise’s marriage to the wealthy, but somewhat dimwitted, Alain (Gutiérrez).

The Cuban Classical Ballet’s production of this 18th century full-length French ballet is simply breathtaking. While the performances of Feijoo, Sarabia, Oliveira, and Vargas are unquestionably in a class of their own, it is Gutiérrez’s portrayal of Alain, and his flawless execution of the piece, that steals the Fillmore stage along with our hearts. Gutiérrez’s talent charms the audience to a point that we almost root for an alternate ending in which this silly, yet incredibly gifted dancer of an underdog gets the girl!

The Cuban Classical Ballet of Miami hopes to continue for many seasons to come, counting on the support of its sponsors, patrons, and most importantly, the Miami community. Our city’s diverse cultural scene will continue to feed off of, and grow from, the incredible influx of foreign talent.

World Premiere of Adele Myers and Dancers’ new evening-length dance theater work- T.W.I.S.T- featuring the company’s signature blend of athletic physicality and personal theatricality with a dash of wry wit. T.W.I.S.T  is an acronym for These Women in Space and Time and offers engaging and empowering acts of female solidarity performed by a dynamic ensemble of female athletes of the heart. This … +