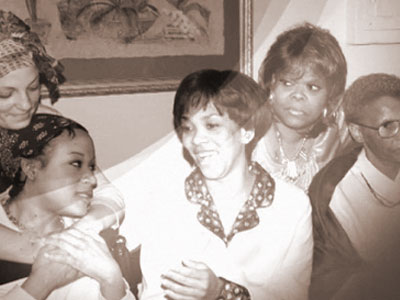 Jar the Floor is a play created by playwright Cheryl L. West presented by The Women's Theatre Project under the direction of Genie Croft. The play tells the story of a quartet of black women spanning four generations make up this heartwarming dramatic comedy. The four, plus a white friend of the youngest, come together to celebrate the matriarch's ninetieth birthday.

It's a wild party; one that is a lovable lunatic glance at the exhilarating challenge of growing old amidst the exasperating trials of growing up. "…A moving and hilarious account of a black family sparring in a Chicago suburb…." according to New York Magazine. Starring in this new version of Jar the Floor will be actresses Karen Stephens, Charlette Seward, Lauren Reppucci, Lela Elam and Carolyn Johnson.