Readings, Author signings and Topical Discussions
From November 11 through 18, 2012. 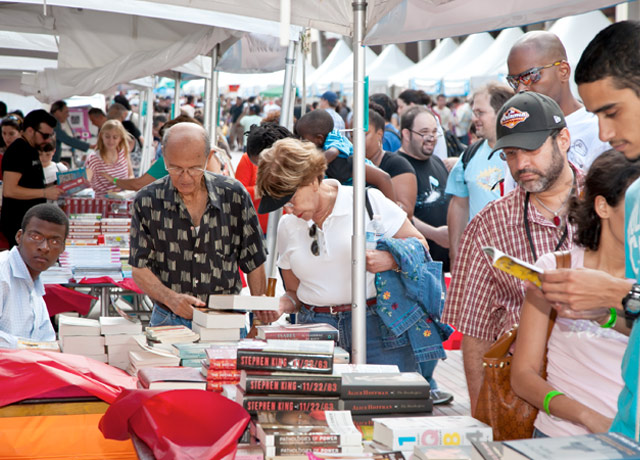 The 29th edition of the nation’s finest and largest literary gathering, Miami Book Fair International, presented by The Center for Literature and Theatre @ Miami Dade College (MDC), is taking place November 11 through 18, 2012, at Miami Dade MDC’s Wolfson Campus in downtown Miami. The always-popular Street Fair runs Friday through Sunday, November 16 – 18, with more than 200 exhibitors from around the country selling books in a festive atmosphere. The Fair, MDC’s flagship cultural event, treats book lovers to eight days of cultural and educational activities, including the beloved Evenings With… series, the IberoAmerican Authors program, myriad learning activities for children, and programs for food enthusiasts in partnership with the college’s Miami Culinary Institute.

The IberoAmerican program presents an array of Spanish-speaking literary voices from around the world, including Homero Aridjis (Mexico), Mayra Santos Febres (Puerto Rico), Abilio Estévez (Cuba-Spain), Santiago Roncagliolo (Perú) and more.
Back again this year is the fall edition of The Miami Writers Institute, with workshops taught by novelist Margot Livesey, literary agent Kimberly Witherspoon, and award-winning author Teresa Dovalpage with a workshop in Spanish, among others.

This year, the fair continues to expand its children’s programming with Generation Genius Days, a component for toddlers, children, tweens and teens to explore, discover and learn through reading and writing, storytelling, art-making, music and theater. Age-appropriate, book-inspired activities are offered, and include a “musical petting zoo”, where kids can handle instruments; map-making and star-gazing; junior engineering projects and science experiments; creative writing and theater workshops, computer storyboarding for comics and cartoons, and other activities that can lead to learning and discovery in the various subject areas, such as English, math, history, geography, the sciences, the visual arts and others. An additional day of author readings for students on field trips is now on the schedule, as well as a fourth day of readings, storytelling and entertainment on the two children’s stages.

The fair also continues special programming for educators with the day-long School of Comics and Graphic Novels – a series of workshops on how to use comics in the classroom – and adds workshops on how to teach creative writing to K-12 students. Miami Book Fair International 2012 promises to be another exceptional literary event! For regular updates on the Miami Book Fair, please visit www.miamibookfair.com, call 305.237.3528 or email wbookfair@mdc.edu.