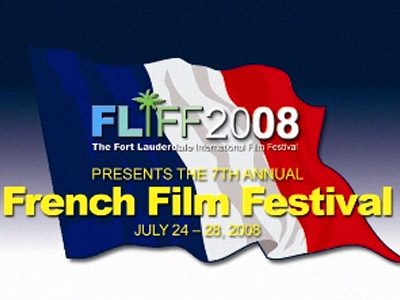 Take a journey to France, from the comfort of Cinema Paradiso's stadium style seating as the 7th Annual Perrier French Film Festival lifts off from July 24th through 27th, 2008. Presented by the Ft. Lauderdale International Film Festival, its French cousin will showcase some of the top new films from the country and include some popular classics as well. There will be wine and cheese nightly and the Opening and Closing Night Soirées are always a hit.

The Hikers in St. Tropez. (2008, Comedy)
Ten years after a memorable hiking trip to Corsica, the four are still good friends and decide to take another vacation together and set off for St Tropez. Upon arriving in the town, they meet, completely by chance with Eric, their guide in Corsica ten years earlier. Eric feels totally at home with the Riviera scene and, once again, turns out to be the perfect guide for an unforgettable vacation… Almost perfect!

Daddy Cool. (2008, Comedy)
Philippe, a scientist living in the USA, has to come back to France to look after his young girl Eglantine, who he hasn't seen in many years. Wanted to have a nice relationship with her, he discovers that Eglantine, 15 years old, has better things to think about, like friends, parties, or even more boyfriends…

Two Lives Plus One. (2007, Comedy / Romance)
Everyone knows that Eliane Weiss is dedicated to her husband, daughter and pupils. But she longs for more – more time for her, more fun, more thrills. So when she decides to start working on her passion, writing, and incidentally meets an attractive publisher, everyone is taken by surprise. As their seemingly perfect life starts to fall apart, everyone will have to readjust to the new Eliane. A comedy combining love, life and her Jewish family.

The Grocer's Son. (2007, Bittersweet Comedy)
It's summer. Antoine has to leave the city to help his mother in the family grocery store in Provence. His father is sick and unable to drive the truck. Antoine is pleasantly surprised by his encounters with the villagers – stubborn, funny, irascible folk whose joie de vivre is contagious. Like taking a vacation the French countryside and meeting people there of whom you grow extraordinarily fond, The Grocer's Son is an unalloyed pleasure, start to finish.

Cat and Mouse. (1975, Comedy / Thriller / Classic))
Cat and Mouse is a comic thriller about a jaded and charming police inspector is assigned along with his cheerful partner to a case involving the mysterious death and/or suicide of a wealthy entrepreneur. The chief suspect is his enchanting wife who was aware that her husband had a mistress. It is also possible that the dead man may be the victim of a radical terrorist group.

Jacques Brel is Alive and Living in Paris. (1975, Musical, Nostalgia, Comedy)
Brel's songs are very much of the French tradition of singing that will be more familiar to English-speaking audiences through the songs of Edith Piaf and Charles Aznavour, and are characterized by a wonderful exuberance, a celebration of wine, women and song, yet they are often tempered by an edge of bitterness, a sense of a melancholic longing for an youthful innocence uncorrupted by the horrors of war or the fear of old-age, death and oblivion.

18 Years Later. (2003, Comedy)
Sequel to the ‘85 film Three Men and a Cradle, (re-made in U.S. as Three Men and a Baby). Marie on the verge of turning 18 decides to spend a summer with her mom Sylvia, along with Sylvia's husband and his two young adult boys. Eventually Marie's three "dads" and a housekeeper show up. The differences between Americans and the French, the foibles of single parenthood, and the pitfalls of middle-aged love and sex provide the material for the film's comedy.

Passe-Passe (Closing Night Film and Party) (2008, Romance & Suspense Comedy)
Darry, 35, an unemployed loser, has just stolen a BMW. Irène, 50, is the ex-mistress of a government minister. For love, she played the go-between in an illegal weapons deal with Korea and now is being pursued by the Koreans, Secret Service and others. By chance Irene and Darry hook up and the mismatched couple hits the road, soon discovering that they actually have a lot in common. The Closing Night party follows the screening in the "Paradiso Patio" Courtyard