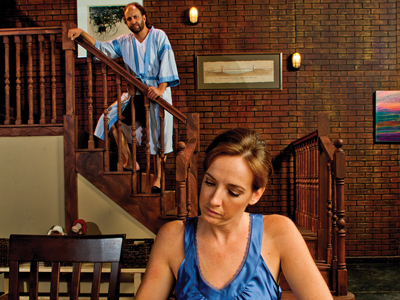 Although I cannot take credit away from the great contemporary playwrights and directors of our time, I think we could certainly agree that more often than not, a play’s success depends on the quality of its actors just as much as on the quality of its writing. Michael Weller, one of the greats in my opinion (known for Moonchildren, 1971 and Spoils of War, 1988), knows how to write “Us” in the most resonant way. It is impressive when a writer not only expresses his own emotions in a crystal clear manner, but more than that, is able to translate everyone else’s just as clearly. However, none of this would make a difference to an audience tormented by the stiffness of an actress, or the passiveness of an actor. “Fifty Words”, one of Weller’s best, is presented to us this season at GableStage under the direction of Joe Adler, and stars extremely talented Erin Joy Schmidt as Jan, and Gregg Weiner as Adam.

This is not the first time we have had the pleasure of enjoying a play with Schmidt as its star; just last season at The Mosaic Theater in Ft. Lauderdale she starred in “Dying City”, and before that, we saw her in Mad Cat Theater’s production of “Viva Bourgeois!” Though I will say that their plots vary in relevance and value, Schmidt’s performances are always extraordinary. Equally talented, Gregg Weiner superbly carries the role of Adam, an architect/father/husband/adulterer.

The play opens as the couple settles for dinner on their first night alone since the birth of their seven-year-old who has finally made a friend and landed a sleepover. Muted by talks of new business ventures, a crazy mother-in-law, dinnerware, and their son’s problems in school, Jan and Adam’s marriage seems quite mundane – but what marriage is? It is only when we stop and listen to the variety of meanings in their subtle words and razor-sharp jabs at each other that we begin to sense an underlying chaos just waiting for one of them to stop pretending. “Just watch Schmidt’s face when Jan, alone after wild sex that is as much combat as connection, feels her anger giving way to the reality of impending loss,” writes celebrated Miami theater critic Christine Dolen, “Or observe Weiner’s conflicted Adam, feeling wounded and guilty and torn, trying to decide which road to take into his future.”

GableStage’s production of Fifty Words is a perfect account of the modern marriage – sparked by passion, tied by vows, and endured with wine in the most humorous of ways. Jan and Adam’s never-ending night raises the question of whether or not they would have even chosen to spend a night together – vulnerable to each other. Would they have silently endured their “life” having never had the chance to really speak, reveal, and confess?