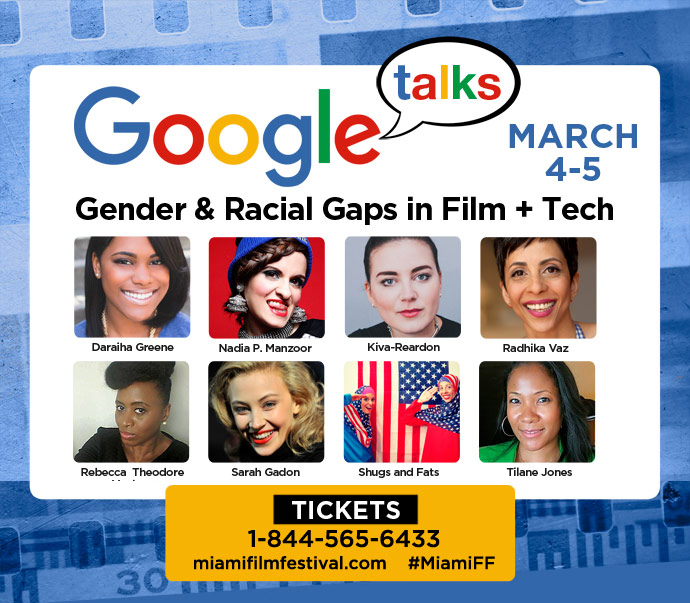 11:00am-12:30pm: Tilane Jones
Tilane Jones- (Selma Movie) the executive director of ARRAY an independent film distribution collaborative, that aims at disrupting the current model to change the ecosystem of the film industry and dedicated to amplifying the voices of women filmmakers and filmmakers of color around the globe. Jones will discuss how ARRAY is creating avenues for the distribution of films and what wider distribution of their stories means for reshaping societal narratives of race and gender. ARRAY has distributed thirteen feature films since 2011 including Ava DuVernay’s award winning Middle of Nowhere, Andrew Dosunmu’s Restless City, Storm Saulter’s Better Mus’ Come, Neil Drummings’ Big Words, and Haile Gerima’s Ashes and Embers.

1:30pm-3:00pm: Sarah Gadon-Actress/Director
Rising star known for her eclectic roles in films such as Indignation (Based on Philip Roth’s novel), A Royal Night Out, Maps to the Stars, Belle, and Netflix’s forthcoming mini-series Alias Grace (based on the book by Margaret Atwood, directed by Mary Harron) to name a few. Gadon will draw on her experience in front of the camera with female-helmed sets, her directorial debut with TV documentary Reelside, and how she’s asserted professionally herself to build a successful career.

11:00am-12:30pm: Rebecca Theodore-Vachon- Writer/Editor/Podcaster
Film/TV editor at The Urban Daily founder of the blog Film Fatale NYC, and co-host of the “Cinema in Noir” podcast, (which discusses “all things cinema-from a black female perspective”), will be speaking about how the debacle on Twitter of #CoatSwitching showed (once again) how vital it is to have a multitude of voices and perspectives talking about film-and yet bylines are still largely dominated by men and lack racial representation. Rebecca will also speak to why criticism matters, how it can champion-and challenge-a wider range of stories, and shed light on how she’s carved such a large platform for herself in the field.

1:30pm-3:00pm-Radhika Vaz – (Author/Writer/Comedian) and Nadia P Manzoor (Actor, Writer, Producer)
Both creators of ‘Shugs&Fats’ – a Gotham award winning comedy web series; team up to talk about using comedy to spark difficult dialogue and overturn stereotypes. They will walk you through their creative journey from developing two unlikely comedic characters to pitching a long form TV show on the mean streets of Hollywood. They will talk about their evolution as creators, writers, and eventually as producers, and how despite living in different continents they were able to make it work. Finally, they will discuss how their desire to spread the word of feminism was ultimately the driving force behind their comedy.

Academy Award-winner Sam Mendes (Skyfall, The Ferryman) directs Simon Russell Beale, Adam Godley and Ben Miles who play the Lehman Brothers, their sons and grandsons. On a cold September morning in 1844, a young man from Bavaria stands on a New York dockside. Dreaming of a new life in the new world. He is joined by his two brothers and an American epic … +

FilmGate Miami’s Swamp DOCS brings up a conversation series exploring current issues affecting the South East Region of the US. This event provides informative support to documentarians and digital journalists. We at FilmGate Miami are stoked to have this officially open to the public. The Swamp Docs event features a pitch session segment for projects that need assistance & guidance followed by … +