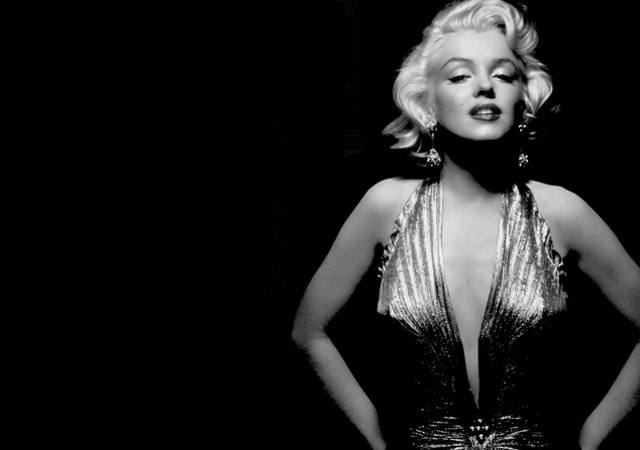 Marilyn stars in her first big role for Twentieth Century Fox, even though she was still under contract as a stock actor, in the film which allowed her to become the superstar of the studio. Marilyn is Rose Loomis, honeymooning with her husband George (Joseph Cotton) in the popular honeymoon location, Niagara Falls. So popular, in fact, that another couple checks into their room, and they find themselves soon entangled in more than that mess. In typical film noir fashion, (besides the not-typical-for-noir Technicolor) betrayal leads to much more, and a master plan goes astray and gets complicated. Thanks to the magnificent backdrop, engaging performances, and technically sharp directing by Henry Hathaway, Niagara is glorious and visually spectacular, kind of like the falls of the title, and the star.

Twentieth Century Fox churned out a collection of vibrant Technicolor (and later, Cinemascope) musicals in the 1950’s, chock full of entertaining numbers like “Two Little Girls from Littlerock” which opens and sets the tone for Gentlemen Prefer Blondes. These two girls, Loreli Lee and Dorothy Shaw, working and gold digging a cruise ship on their way to Paris, were none other than Marilyn Monroe and Jane Russell in two of their most iconic roles. Showing his versatility, director Howard Hawks adds his screwball comedy expertise to the grande musical production adapted from the Broadway play and the Anita Loos novel. The result, aided by miles of campy and risqué double entendres and legendary routines like “Diamonds are a Girl’s Best Friend”, make Gentlemen Prefer Blondes one of the all time best loved musicals. See it on a big screen where it belongs!

As the first film made in Cinemascope, a novelty as big as 3/D at the time, How To Marry A Millionaire was the first true wide screen film (even though The Robe, the second film made in CinemaScope, was released first). As a remake of the 1933 film The Greeks Had a Word For Them, this time three New York City models Shatze, Pola, and Loco (Monroe, Grable, and Bacall) decide to set up a penthouse apartment (at 36 Sutton Place South, Manhattan, to be exact) for the purpose of using their talents to attract men with money. Inevitably, they figure out that Mr. Money is not always Mr. Right, and is the money really worth it? But in the meantime, the audience is treated to some of the fanciest go digging footwork ever, in wide screen!

With director Billy Wilder joining the 20th Century Fox team, adjusting from his preferred black and white to color, as was required in Marilyn’s contract with Fox, a modern day comedy about adultery was born, even though the still-in-effect Hayes Code prevented it from being as risqué on film as the famous play. Tom Ewell reprised his Tony award-winning role as the daydreaming Richard Sherman who is more than curious about the beautiful neighbor while the family is away on vacation, while the beauty Vanessa Brown was replaced with the world’s biggest star, Marilyn Monroe. And that scene in the subway when Marilyn’s white dress blows up? The dress that just fetched millions at auction, a record for a movie costume? It never really appeared in the film in the way you remember it. That was a figment of your imagination.

Joe and Jerry (Tony and Jack), two Chicago musicians who witness the St. Valentine’s Massacre, and need to get outa town, take the only gig they know of, replacement sax and bass for an all-girl band on their way to Miami. Problem is they are not girls, but they solve that real quick (which was one of the problems with the film for the Catholic church, which condemned it, and for Kansas, which banned it). Marilyn is the ukulele player in the band, and that presented another problem for the boys…but Billy Wilder’s screen legend has become one of the best loved films of all time, and by now, fifty years later, the Catholic church and Kansas are both on board, kind of.

Tickets for the films are $10 each, or $9 Students/Seniors, & $8 MBC Members. A “MarilynPass” is available for all films for $40, or $35 Students/Seniors, or $30 MBC Members Available at www.MBCinema.com. Exhibition: Complimentary Admission open 1/2 hour before MBC screenings.