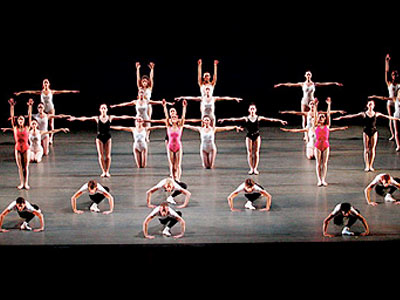 A quarter-century ago, Edward Villella was in South Florida giving a lecture. After his speech, a group of arts activists approached. They wanted to start a ballet troupe here, they told him, and didn’t know how to go about it. Would he consider advising them?

With one word – “Sure!” – Villella set in motion the birth of what would become one of America’s finest companies, the Miami City Ballet. With that one word, he helped to put South Florida on the cultural map, nationally and internationally. His vision, however, became not only a romantic one but a critical one. He saw a tremendous challenge in front of him: how to bring George Balanchine-quality ballet to an area more noted for tarpon fishing. But first things first.

“I needed to do a ten-year production plan with an estimated budget. I did five years of programs so that one could see how one could build a company with a minimal number of dancers. And step-by-step to build a company into a national visibility with international implications,” he says.

The group was wise to approach Villella. Ex-athlete and once star principal dancer of the esteemed New York City Ballet, his attention to detail is a trademark he would later pass on to his dancers. He also was familiar with good luck: He and South Florida arts activist Toby Ansin established the MCB and soon after, in 1986, opened a studio on Lincoln Road – right in time to catch the first wave of South Florida’s artistic emergence.

Miami Vice was newly on the air, giving all of this area national attention. Other artists – painters, designers, writers – laid claim to South Beach. The steady rise of MCB’s acclaim would parallel that of South Florida’s.
Villella went to work. His research showed that many people who had moved recently to South Florida had been art patrons up North. And, better yet, they were knowledgeable about his work. This told him he had a built-in demographic of ready-made patrons. Ana Codina Barlick, the new President of the Board of MCB, believes the numbers go even further.

“Ballet is actually a very generally accepted art form in Latin America,” she says, “and with the Hispanic population … If you look at the history of ballet even in the United States, a lot of the dancers come from Latin America.”

It was also good timing that South Florida was in need of Villella just as he was ready to leave the Northeast. The group pressed him to stay and oversee this new company. He was ready to be swayed.

“Everybody I talked to said, ‘What are you doing down there? It’s a cultural wasteland!’ … But as I got to know the beaches and the lifestyle and the boating and the golfing, all these were very, very pleasurable things year-round. So that began to appeal to me (and) so I got kind of excited about this challenge.”

Villella was good for his word: He went step-by-step in building a new company from scratch. Initial performances were held at Gusman Center for the Performing Arts in downtown Miami. Later performances branched out to Broward County and then to Palm Beach and Collier counties.

Balanchine pieces were emphasized, of course (the company’s October 1987 debut included his Tschaikovsky Pas de Deux and Allegro Brillante), but were later accompanied by works from modern arrangers such as Jerome Robbins (Afternoon of a Faun, Fancy Free) and Twyla Tharp (Nine Sinatra Songs). But despite the diversification and the artistic challenges, there was always the emphasis on perfection.
“You offer quality, and you show that indeed (the company) could have a state level, a national level, and an international-level artistic component that would begin to designate South Florida – and Miami in particular – as a cultural destination.”

By 1990, the MCB was performing in front of overseas audiences and establishing its credentials internationally. There were performances at the Lyon Biennale Internationale de la Danse in France and works danced at the prestigious Edinburgh International Festival in Scotland. In January 1993, the MCB School was established by Villella and his wife, MCB School Director, Linda Villella.

Though the numbers differ somewhat from area to area, the demographics of MCB’s patrons skew toward college-age women over fifty, which might suggest a small, possibly elitist, audience. But Villella will have none of that, insisting that a love of dance, even that of classical ballet, can be kindled in everybody.
“We don’t look at that as some kind of negative but as a positive. And we can build up on that. The idea is simply to introduce to South Florida qualitative entertainment. So it’s an educational process on an ongoing basis. The real exercise is getting people to see us once. If they see us once, they indeed say, ‘Wait a minute … first of all, it’s good. Second of all, it’s entertainment! Wow!”

Putting together the cachet of the Villella name, the rigorous training demanded of his students, adherence to the Balanchine tradition, and the challenging works chosen allowed the company to grow in size and stature. The troupe performed at both the John F. Kennedy Center’s Balanchine Festival and its International Dance Festival. (The Washington Post’s critic noted in 1995 that the debut was greeted by “the vociferous enthusiasm of a sellout audience.”) Other prestigious debuts followed, including performances at the 1996 Olympic Arts Festival in Atlanta, the Brooklyn Center for the Performing Arts, and Dorothy Chandler Pavilion in Los Angeles.

It all culminated in March 2009 when, after years of teasing New Yorkers with his troupe’s performances nearby, Villella finally brought his dancers back to his home theater, Manhattan’s City Center. After spending decades tangling with the realities of South Florida (“We’re not in a part of the world where culture is something you give money to,” he once noted wryly), his dancers were performing, to ecstatic reviews, at the theater where his own career had begun. Wrote the (London) Times: “New York dancegoers don’t often fall headlong in love with an unfamiliar ballet company. But that’s what happened when Miami City Ballet made its Manhattan debut at the City Center. New Yorkers loved it.”

A problem, however, is how South Florida’s financial concerns have become those of the company. Its work has never been more highly regarded, but the economic crash has made fundraising a nightmare. Despite ongoing help from the City of Miami Beach – including a $5.2 million bailout in 2005, repairs done gratis to the company’s building (which it purchased), and leasing the theater for only $1 annually – the company is now in such dire straits that it has depleted its $2 million reserve and taken out a line of credit. Worse yet, financial cutbacks are having a negative artistic effect. The MCB has discontinued using a live orchestra, cut its advertising budget, and allowed dance positions to go unfilled.

“We had a budget of $14.9 million last year,” says Villella. “We have reduced now. This coming year’s budget is $11.4 million. And that means a lot of reduction in staff, in dancers, in a lot of things such as touring … we are down to 43 (dancers).”

But Villella and Codina Barlick both point to an upside. Says Codina Barlick, “One important grant that we received last year for our collaboration with the Cleveland Orchestra was the Knight Arts Challenge. The Foundation in our community is kind of a program to support the arts. It has been very helpful during these financial times, and that has really helped us to do this.”

“We are now in the second round of competition for the next grant cycle,” says Villella. “We’re looking at the Knight Foundation to help provide us with three years of orchestra as we approach our twenty-fifth anniversary. So there are positive things here with all the negatives.”

The economy will improve at some point, and with that in mind the MCB is planning its future. Already scheduled are Romeo and Juliet and Balanchine’s A Midsummer Night’s Dream, large-scale productions that will use pledges committed before the crash.

“There’s an infinity about quality,” Villella says. “Once you seek it, you’re seeking perfection, which you’ll never achieve. And that perfection causes you to reach beyond your grasp, no matter how good you get. So that’s what drives us: the seeking of qualitative performances.”

The White Peacock, a Flamenco ballet by Ilisa Rosal, inspired by the D. H. Lawrence novel of the same name with three Guest Artists from Spain and four company dancers and musicians at The Colony … +

Divided by oceans and centuries, American tap and Indian Kathak dance come together in a celebration of rhythm and culture in SPEAK. Leela Dance Collective’s Rachna Nivas and Rina Mehta, contemporary leaders in the ancient … +