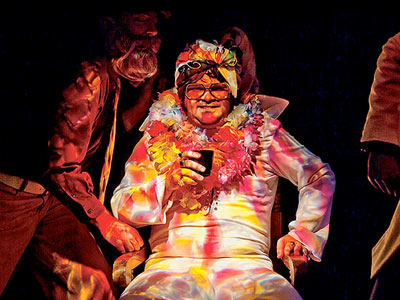 It is no secret that there is something for everyone in the Miami art scene. If the theater is what calls to you, taking a chance on smaller companies and their productions may be something you find exciting.

The Miami based Mad Cat Theatre Company, founded in 2000, takes pride in producing unique performances with the acting talents of Erik Fabregat, Betsy Graver, Erin Joy Schmidt, Joe Kimble, and many more under director and founder Paul Tei. Self proclaimed “merry pranksters”, Mad Cat Theatre Company members present a Miami audience of all ages with an alternative to classic theater.

Everything from the company’s name to the wonderfully tacky set design plays brilliantly into this family’s quirky style. “It was always a dream for Paul to create a theatre company and form it much like a band,” Mad Cat states on its website, speaking of the unique bond that is formed between a group of playwrights, actors, and designers throughout the course of working on many productions– a bond that inevitably translates onto the stage.

Whether performing new and original pieces by Paul Tei and resident playwrights or delivering Tei’s own adaptations of some of the classics, the actors of Mad Cat Theatre Company put on a great show with contagiously enthusiastic performances that keep their fans coming back for more.

Last month, Tei and Mad Cat brought to life his adaptation of Moliere’s Le Bourgeois Gentilhomme. Originally performed in 1670 for the Sun King Louis XIV, Moliere’s five-act Le Bourgeois Gentilhomme tells the story of Jourdain, a middle-aged bourgeois whose father grew rich as a cloth-merchant, and whose only goal in life is to rise above his middle class standing and be accepted by aristocracy as a gentleman. Tei parallels the story of this foolish social climber in his two-act version set in 1971 Graceland. This adaptation called Viva Bourgeois! Mad Cat’s third play with music this season, tells instead the story of a tubby social climbing obvious Elvis Presley played by the hysterical Erik Fabregat, winner of 2 “Best Of…” awards from the Miami New Times. Over the top entrances, singing and dancing numbers, and an ensemble cast that keeps a stitch in your side from laughing, made Tei’s adaptation a comedic best.

Mad Cat Theatre Company is a not-for-profit organization sponsored by a number of individual donors, the Miami Light Project, Miami-Dade County, Miami ArtZine, and others. All donations are tax deductible to the full extent allowed by law.

What does success mean in America? What does it mean when you don’t make it? In THE MONROE DOCTRINE, poet and adjunct professor REAL MONROE tries to hold his world together from his trailer on … +