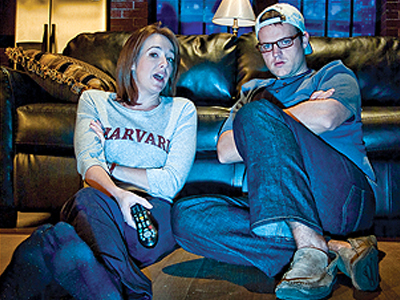 Hollywood producers have done the subject of Iraq and the War on Terrorism to death over the past years. However, since the subject is still very much existent, close to our hearts, and immensely relative to our society, we should not allow these blockbusters to cheapen its reality and take away from the worthwhile stage expressions happening in theaters throughout the country.

I recently saw a production of a play entitled Dying City at the Mosaic Theatre in Plantation. Directed by the theater’s Executive/Artistic Director Richard Jay Simon, Dying City stars a familiar face, Erin Joy Schmidt, who we saw in “Viva Bourgeois!” at Mad Cat Theater, and veteran South Florida actor, Ricky Waugh. The play, a Pulitzer Prize finalist in 2008, by Christopher Shinn, tells the story of a soldier deployed to Iraq, his wife and now widow, and his twin-brother Peter.

The play opens on a lonely night in an almost-empty New York City apartment as Kelly (Schmidt) melts into her couch for an episode of Law & Order after sorting through some books. At first, our protagonist’s actions seem like those of a regular weekday night, it is only when the buzzer rings like an alarm and first hint of trouble that we sense the beginning of a plot. After about what seemed like a half hour of hesitation, Kelly decides to answer the door and let her brother-in-law Peter (Waugh) up for an unexpected visit. The evident awkwardness between the two then leads to the inevitable conversation of husband and brother Craig’s (also Waugh) “accidental” death in Iraq and the last time they even saw each other (at Craig’s funeral).

Dying City takes the audience from year to year in a series of flashbacks of the night before Craig left to Iraq and the present night of Peter’s unrequited visit. Schmidt and Waugh’s performances are a display of incredible talent and undeniable thespians’ chemistry and connection, as they both switch back and forth from character to character; Shmidt, from a broken widow to passionate wife, and Waugh from gay-actor Peter, to abusive American soldier Craig.

The Mosaic Theatre Company is celebrating its 10th season this year in its home in Broward County. The company’s mission is simple: “Mosaic Theatre is a professional company dedicated to presenting thought-provoking, innovative theater.” Dying City is a perfect example of the “thought-provoking” productions that this Carbonell Award winning theater company promises to present us with each season.

Richard Jay Simon and the rest of the dedicated staff at Mosaic Theatre welcome audiences of all ages to their productions, often donating tickets to non-profit organizations that apply through their website at www.mosaictheatre.com. This is a company that believes in keeping theater current and ever evolving, and in presenting audiences with works that stir-up something or everything inside.