World Premiere of Likeness by David Caudle. From Sep 27th through Oct 28th, 2007. 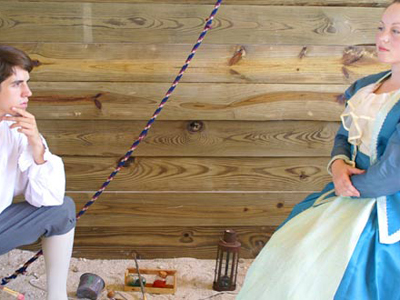 Under the artistic direction of Ricky J. Martinez, New Theatre 2007-2008 main season remains true to its mission to provide a forum for new works by American playwrights, often making their world premiere at the innovative theatre.

Likeness, set in Colonial Boston, tells the story of an idealistic young painter commissioned to create an idealized portrait of a tyrannical Loyalist's daughter finds there is more to painting this portrait than meets the eye. Though loath to tell a lie with his brush, he desperately needs the gig. His subject, meanwhile, believes herself beyond improvement. Within that rectangle of canvas, an artist struggles to define his identity, and a girl struggles to protect hers, as the earliest rumblings of revolution rattle the studio walls.