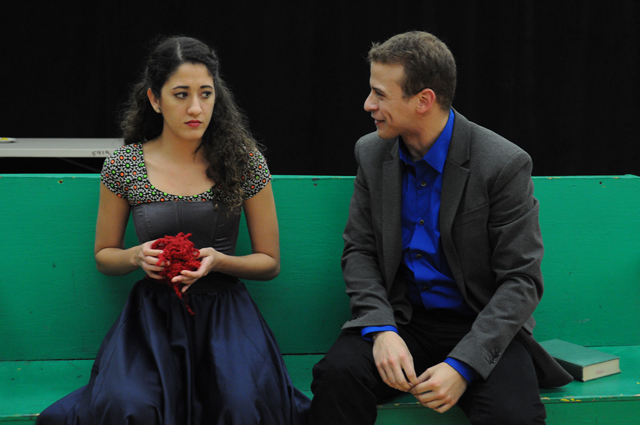 New World School of the Arts college music program presents A Little Night Music, a musical adaptation composed by Stephen Sondheim and based on the book by Hugh Wheeler. Directed by NWSA dean of theater, Patrice Bailey, the musical highlights the talents of music theater college junior and seniors while sharing the stage with an 18-member NWSA Symphony Orchestra, led by Alfred Gershfeld.

“Working on a Stephen Sondheim musical for the actor and the director can be a little daunting at times due to the demands of the music, the quick pace of the lyrics and the heightened circumstances that the characters find themselves involved,” said Patrice Bailey, dean of theater at NWSA and director of the musical. “ Our rehearsal process has been a wonderful challenge for our students and an opportunity to further enhance, strengthen and reinforce their vocal and acting training”.

NWSA College Theater students Anissa Comonte and Eduardo Morales. Photos by Juan E. Cabrera, courtesy of NWSA. In 1957, Harold Prince and Stephen Sondheim came up the idea of collaborating on a musical with a score made up entirely of waltzes. However, it wasn’t until 1971 that Sondheim remembered a charming 1956 Ingmar Bergman film, Smiles of a Summer Night about the foibles of lovers on Swedish midsummer night that fit the idea of their collaboration. Prince and Sondheim were able to secure the rights to the screenplay and work with Hugh Wheeler on a script adaptation, which stayed true to the spirit of the film. Thus, A Little Night Music was born. A Little Night Music is a romantic musical set at the turn of the century Sweden. It follows the frolics of misguided couples blinded by their own sexual desires and caught up in the chase, the game, the fear of lost youth, as well as the realization of one last opportunity for love. A Little Night Music is considered by many theater critics to have been turning point in Stephen Sondheim’s work. For the first time, his musical style took on a more “operatic” nature which continued in such works as Sweeny Todd and Into the Woods, featuring extended solos, duets and ensemble pieces.

About the NWSA Theater program:

Theater and music theater students at NWSA hone their craft through acting technique, movement and speech classes, focusing on fundamentals of physical and emotional preparation. With performance at its core, training is based on the classical texts and the principles of drama as well as practical incursions into the contemporary and experimental edges of theater. Consequently, alumni are found performing onstage nationally and internationally and their talent and vision are recognized and highly regarded in the industry.

The last concert of the season for Nu Deco takes place at The Citadel with a program of music by John Adams, Marc Mellits, and the orchestra’s second symphonic suite from the vast catalog of Radiohead. The concert will feature a collaboration with Grammy-nominated composer, pianist and electronic artist Pascal Le Beouf. A second featured collaborator to be announced later this season. … +