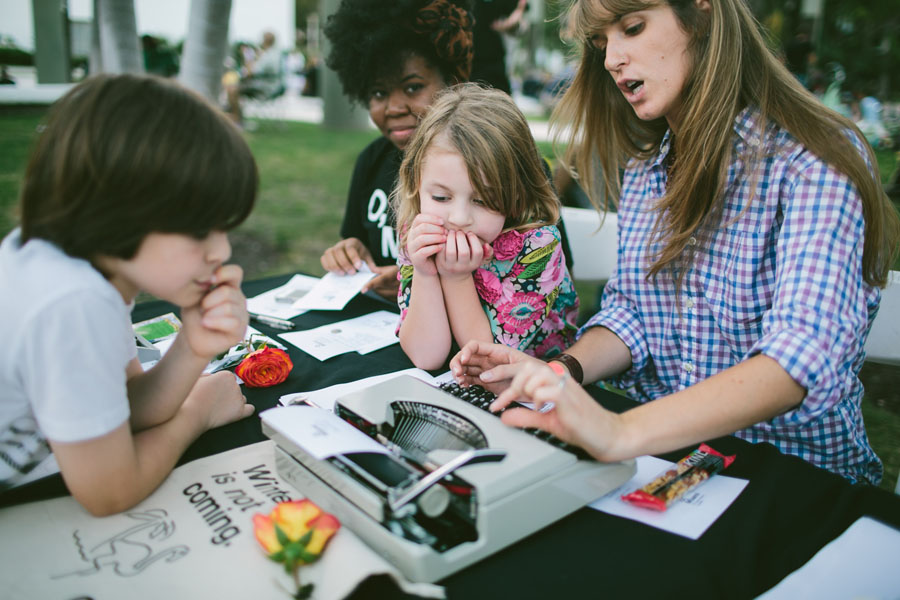 On April 1st, O, Miami kicks off the month with a poetic boat ride up the Miami River. The festival ends on April 30th with a teen poetry and music competition. In between, O, Miami celebrates contemporary poetry and transforms Greater Miami into a canvas for the literary arts, and the ideas to get poems in front of Miamians this year are more ambitious than ever. With over 30 events and 23 projects happening in the course of 30 days, O, Miami inverts the usual festival model: instead of attempting to attract a crowd over a brief period of time, O, Miami spreads poetry all the way to the edges of Miami-Dade County for the duration of an entire month.

Poetry in the Park
On April 12th, O, Miami once again partners with New World Symphony and the City of Miami Beach to present a radical form of a live poetry reading in Soundscape Park. Former U.S. Poet Laureate Kay Ryan and 2013 Beatrice Hawley-winner Jamaal May read live on the 7,000 square foot wall of the symphony as part of the second annual Poetry in the Park Wallcast. From 4-7:45 p.m., enjoy free performances in the park from DJ Le SPAM, New World Symphony musicians, and MDC Live Arts, and cheap eats. At 7:45 p.m., spread out your picnic blanket and enjoy the “biggest” poetry reading in the world in state-of-the-art digital projection and high-definition sound.

Manual Cinema
On April 23-25, O, Miami presents the world premiere of a new performance by Chicago-based shadow puppetry group Manual Cinema. Based on poet Federico García Lorca’s play El Divan de Tamarit, the performance will take over an indoor/outdoor warehouse space in Miami’s Little River neighborhood, immersing visitors in a theatrical experience that employs multiple digital and analog projections, live music composed by Manual Cinema and performed by the Nu Deco Ensemble, and cocktails and food from Hot Satellite Pizza (the guys behind in Roberta’s in Brooklyn, NY).

Ode to the Code
Co-created by O, Miami and WLRN, “Ode to the Code” is a South Florida-wide poetry contest that turns the least lyrical designation of one’s home, a zip code, and turns into an occasion for poetry. Beginning in March, WLRN and O, Miami will accept odes to South Florida zip codes in the form of the code itself: five lines, with each line containing the number of words designated by the zip numbers. (For example, 3 words, 3 words, 1 word, 3 words, 9 words.) Every Friday, WLRN will announce the top ten poems of the week on their website. On April 23rd, a list of finalists will be announced who will read at a special event on April 29th at Vizcaya Museum & Gardens. Some contributing poets will appear on WLRN radio and WBPT2 TV. Go to WLRN.org for more info on how to enter and use the hashtag #zipodes on social media.

Murinals
Murinals are poems installed in perhaps the least likely place: on urinals across Miami-Dade county. Using classic gold leaf, artist Ian Thomas paints poems onto the porcelain “wall” of Miami urinals. The installations are only completed however by the participation of the “male” audience members who “defile” the hallowed words while simultaneously “exposing” themselves to the poets’ words, thereby creating a tension between dominance and vulnerability.

Secret Sonnets
Around 58,000 residents of Miami-Dade County are visually impaired but only a fraction of those use Braille. “Secret Sonnets” brings the beautiful language of Braille to a larger audience by inviting poets to send original love poems to be brailled and sent to a Miami-Dade County address of their choosing. The poem being submitted should be an original body of work, less than a page long, and the intended recipient must be a resident of Miami-Dade County. From April 11-20, 2014, the poems will be transcribed into Braille and checked for errors. Beginning on April 21, 2014, the brailled poems along with a Braille/ Print alphabet card will be mailed to their intended recipients using the United States Postal Service. Included will be a link to a website with the transcribed poems. Take advantage of this rare opportunity to interact with a different literacy mode!

Wallace Freezins
The only Emperor is the Emperor of ice cream, and the Emperor of poetry projects is the one that involves ice cream. Artist Randy Burman, who created last year’s iconic Department of Poetry Works streets signs, returns to O, Miami with “Wallace Freezins,” a project that puts South Florida poets on ice cream wrappers. Throughout April, “Wallace Freezins” (played by local actor/comedian Randy Garcia) will appear at Miami-Dade events selling his signature poetry ice cream.

Powers to the People
World-renowned artist Steve Powers creates his first mural in Miami, a new commission from O, Miami.

The Outdoor MFA
Our audience asked for more workshops, and here they are. O, Miami presents: The Outdoor MFA, a series of four workshops that refuse to accept that sitting around a table is the only way to learn how to write. Nonfiction writer Nathan Deuel, author of Friday Was the Bomb (Amazon Best Book of the Month), leads two “walking workshops” that lead participants through entire Miami neighborhoods; while poet Michael Hettich takes his two classes onto the water with the first-ever Kayak Poetry Workshops.