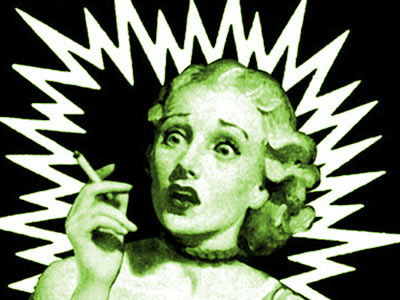 Lock up the youngsters, cover grandma's eyes and batten down the hatches – Reefer Madness, The Musical has invaded The Waterfront Playhouse. Based on the 1936 movie, this outrageously twisted musical of sex, drugs and showtunes was a long-running, award-winning musical in Los Angeles and finally makes it to South Florida with the Waterfront production. It's directed by Artistic Director, Danny Weathers, with musical direction by Michael Fauss and Penny Leto, with a cast of fourteen actors whose talent will blow your mind.

As the play opens, The Lecturer, a severe authority figure, informs the audience of the new drug menace "Marihuana," which threatens the American way of life. His warnings are reinforced by The Placard Girl who throughout the play holds up large signs that clearly state the moral of what we've just seen. The government will use the power of radio, the fine papers of William Randolph Hearst and powerful iconography such as Uncle Sam, George Washington and Lady Liberty. Patriotic Icons enter and join the group in a rousing production number.