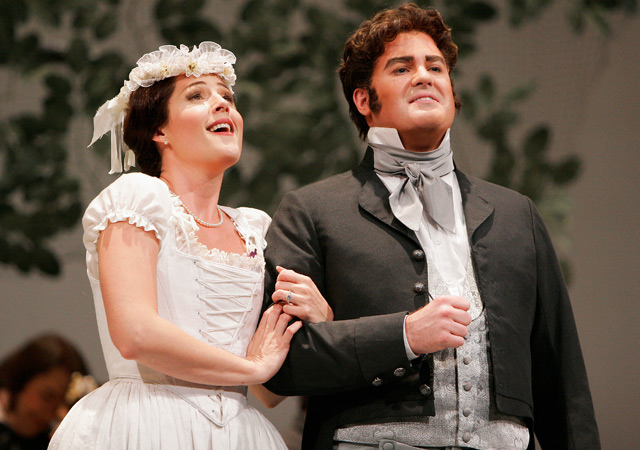 The incomparable Maria Callas, known to many as “La Divina,” made her mark in the opera world with her mastery of the bel canto style. In 1957, Milan’s famous Teatro alla Scala presented a production of Bellini’s La sonnambula at the Edinburgh Festival, with Callas as the star. It was so successful that an extra performance was added, but after it sold out, Callas caused a scandal by refusing to sing it and leaving town. The 23 year old cover, Renata Scotto, had the unenviable task of going before the hostile audience, but she had an unqualified triumph that began her long and distinguished international career as one of the world’s leading sopranos.

Now an Emmy award-winning director, Scotto has new eyes for this beloved classic that is so close to her heart. She was first approached about directing a new production of La sonnambula by former Florida Grand Opera General Director and friend Robert Heuer in anticipation of the company’s 2006-2007 inaugural season at the newly constructed Carnival Center, later renamed the Adrienne Arsht Center for the Performing Arts of Miami Dade County. Having performed the role numerous times to great acclaim, Scotto took careful steps and an uncompromising approach to exploring the proposition.

“I wanted to work with one of my favorite designers, Carlo Maria Diappi – a man of great taste and a great artist,” said Scotto. “I said, ‘without him, I will not do it!”

Scotto got her way and worked directly with the designers on every aspect of the production to ensure that her vision of La sonnambula’s simple, dreamlike world was carried out to perfection. Rather than taking the usual approach of a Swiss village outfitted with a precarious old bridge, her set focuses on a giant oak tree, which is presented in full bloom in Act 1 and begins to shed its leaves as troubles plague the opera’s heroine. Costumes pop against a monochromatic backdrop in an assortment of blues, whites, and soft grays, affording the staging the ethereal quality of a somnambulant state.

Scotto’s production of La sonnambula premiered in Miami in 2007 with coloratura soprano Leah Partridge as the endearing sleepwalker and received great praise. Miami New Times critic Octavio Rocca called it “a sublime musical landmark for this company,” and discerning blogger Opera Chic recalls it as “a flawless evening … [where] this jaded girl (who rubs shoulder with old European snobbery at La Scala almost weekly) found something quite transcendent.”

As La sonnambula prepares to hit the stage at the Arsht Center once again on February 9, 2013, Scotto and a new cast of talented singers are working tirelessly in long rehearsals to prepare for what Miami Herald critic Lawrence A. Johnson calls “Bellini’s most inspired music.” In this production, Scotto is inducting a new soprano, Rachele Gilmore, into the elite company of accomplished Aminas. A rising virtuosa of the coloratura category and former FGO Young Artist, Gilmore made headlines in 2009 when she debuted at the Metropolitan Opera in The Tales of Hoffmann as Olympia. With just three hours notice, she hit the stage and receiving unprecedented praise for her exciting ornamentation of the technically demanding “Doll’s Song.” Gilmore is making her debut as Amina in a way that many sopranos can only dream – under the direction of one of the iconic interpreters of the role, Renata Scotto.

La sonnambula opens at the Arsht Center on February 9 with additional performances February 12, 15, and 17. Tickets start as low as $11 and can be purchased by calling the Florida Grand Opera Box Office at 1800.741.1010 or online at www.FGO.org

A beloved staple in the operatic repertoire, Giuseppe Verdi’s Rigoletto is a timeless story of betrayal, dashed dreams, and mistaken identity, worthy of the best cinematic thriller. Rigoletto follows the conquests of the rakish Duke, who survives revenge plots and schemes along the way. Gilda, whom he has betrayed and abandoned, saves him in the final scene of the opera by sacrificing … +

A special evening of song featuring the talented Benenson Young Artists, led by Head Coach, Timothy Cheung. The Benenson Young Artists will perform a repertoire of art songs by Strauss, Schubert, Schumann, and Debussy in the intimate setting of the Royal Poinciana Chapel. Songs will be sung in German, French, Italian, and English. Liederabend dates back to the 1800s, when musicians and … +

This season, Children’s Performance will feature a 60-minute abridged version of Rossini’s The Barber of Seville performed by Palm Beach Opera’s Benenson Young Artists and Apprentice Artists. Sung in Italian with English narration and supertitles projected above the stage, this iconic opera will be made complete with beautiful costumes, lively narration, and a full orchestra.