Engages with and awards the local arts community. And the winners are… 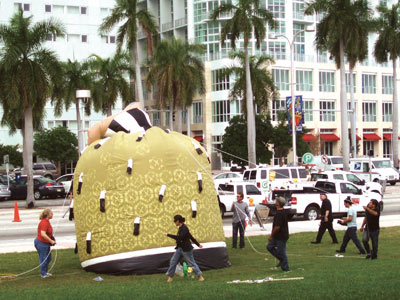 It’s a concern for every neighborhood, but with the current economic meltdown the country is experiencing, it is especially pressing: What action can be taken that will keep the arts scene vital?

The John S. and James L. Knight Foundation came up with an answer: the Knight Arts Challenge, which gives artists in the South Florida community a chance to win grants in order to bring their ideas to fruition. It’s a generous and ambitious five-year, $40 million program dedicated to enriching South Florida’s arts community, not only in terms of specific projects but also its all-important infrastructure. At a time when both local and state economies are running dry and business priorities are being rejiggered, the Foundation is four-square behind transforming and improving the local arts scene.

Lorenzo Lebrija, until recently the Knight Foundation’s Program Director for Miami-Dade and Broward, believes that not only are the arts not a luxury but that they are as important a component in a society as any hospital addition or housing project. “I think it’s worth noting that any community – that every community that wants to be a community – should have art. They are a part of our community. So one could also easily make the argument that, in a year when the government is likely to shift towards (other areas to finance), toward the more charitable works, to when corporations aren’t able to step in, now is the actual time to do it, the best time to do it. Because we cannot afford to lose the arts.”

In an effort to make this as open and easy a competition as possible, the Challenge has only three rules: (a) the idea must be about the arts, (b) it must take place in or benefit South Florida and (c) the recipient must match the grant awarded.

The application, which is available at www.KnightArts.org, is considered by Knight Arts reviewers who look it over carefully. It doesn’t matter what area of the arts is being considered or how big or small the idea is. There are no artistic criteria to meet. The Foundation deliberately wants to keep the definition of art as wide open as possible. In addition, no one area of art is considered more important than others and no specific population demographics must be met by the reviewers. All of the usual rules are not concerns in this competition. The only real determination is to raise the standard for the arts in this area with brilliant ideas that need money to come to life.

Should the application pass muster, it’s considered a finalist. “In truth”, says Lebrija, “one cannot fail the initial application, as it consists basically of two questions: What is the idea? And what is its title? In about 150 words – around 1,000 characters – the applicant describes the project. The purpose behind making it easy is so everybody, even those who ordinarily do not see themselves as requesting and winning a grant, will feel as if they can follow through on this procedure easily.”

The second part of the process is the actual proposal, which is only ten questions about the project, such as why the applicant would be the best individual or organization for this idea, and how they plan to match the funding. The applications that are returned with this information are considered again by the reviewers, who make their determinations and forward the package to the Board of Trustees.

Naomi Fisher submitted two ideas last year, both of which were awarded grants. She considers the process simple but notes that it takes some consideration. “The initial part of the application is super-easy. It’s so incredibly simple and difficult because it’s not too much writing, but it’s difficult because it really forces you to distill your ideas into a very concise, clear statement. And in terms of a grant application, it’s one of the easier ones I’ve done for the initial phase. Really, you just say what you do.”

Not to say that the competition won’t be stiff: Last year was the first year of the Challenge. There were 1,643 applications that eventually were whittled down to thirty-one groups and individuals that actually won a grant. Since the projects were of varying sizes, the grants were, too: They range from $18,000 to $1.8 million. The first $8 million the Foundation is giving away has been split among artists and artistic organizations of every stripe, including visual artists, galleries, musicians, dancers and singers. The winners, who were notified late last year, run the gamut from the huge and/or established (the City of Miami Beach, the University of Miami, Miami City Ballet) to mid level (Miami Light Project, New World School of Arts) to individuals and small organizations (Naomi Fisher, Upper Eastside Garden).

Consider one winner, conductor James Judd, formerly of the Florida Philharmonic Orchestra, and his new organization, Miami Music Project, which will bring classical music back into the classroom over several years for the first time in ages. In addition, he’ll use his grant to institute a yearly festival that will showcase both student and professional works. Another winner is a two-year fellow residency program for new artists who will be taught by well-known international artists. It will be run by a partnership between local developer Craig Robins and the University of Miami, and based in Miami’s Design District. On another artistic front, local filmmakers will be able to seek funding and guidance from a new non-profit institute courtesy of Advance Miami.

Still another winner was Giants in the City, an installation by Artformz. Concurrent with Art Basel Miami Beach, it placed ten huge, inflatable sculptures in Bayfront Park on the edge of downtown Miami. The sculptures were created and designed by ten different artists including Gustavo Acosta, Michelle Weinberg, Tomas Esson and Alette Simmons-Jimenez.

In the recent past, downtown Miami was a place to avoid after dark, but with the installation of this unusual art project, the area became a site for enjoyment and relaxation. Lebrija notes that the sculptures were reviewed by “thousands upon thousands of people who thought it was a very unique experience” and that he himself went to see it on a Friday evening.

Fisher says the Challenge grant she won has enabled her to make specific plans for her alternative-art space, Bas Fisher Invitational, after years of living in a financial netherworld. “We’ll pay our electric bills and our insurance!… It’s basically structural: Everything is about the project. We’ll be able to have modest salaries, we’ll be able to hire help, we’ll be able to paint the walls (and) we’ll be able to step up the game.”

An improvement in the arts scene dovetails with a need for diversity. It, too, is on the wish list of the Challenge reviewers. Miami and South Florida constitute the most diverse area in the country (in fact, Lebrija says, it’s the second-most diverse in the world). The Challenge would like the pool of applicants to have as much variety as possible, as there is a real desire to reach every demographic. And to add to the importance of this opportunity, it should be noted that the Arts Challenge is utterly unique to South Florida. No other community has this kind of a grant program going – not in terms of the ease of the application process or the amount of money available.

Lebrija understands the turnaround in the economy and how some would emphasize other areas to fund, but he believes the arts stand on their own, dollar for dollar. “For arts organizations, this is a wonderful opportunity. The Commission on Cultural Affairs announced last year that it’s almost a $1 billion industry: $600 million in tax revenues, 24,000 people employed. Nineteen thousand people give 648,000 hours of their volunteer time each year, and literally hundreds of thousands of kids each year are touched by the arts through the non-profit community,” he says.

So it is with improvement and diversification in mind that the Knight Arts Foundation seeks to aid its community artists and art entrepreneurs with this chance at funds-with-no-strings. Even those struggling visionaries convinced that they’ll never find the money to match are urged to give it a chance. The Challenge is not only supporting artistic ideas, it’s encouraging dreamers.

The work of multidisciplinary Miami-based artist, Alette Simmons-Jiménez, is rooted in a tradition that values vision as well as craft. Her work celebrates the physicality of the handmade while incorporating tangible spiritual components from our natural surroundings. On receiving a BFA from Newcomb College/Tulane (New Orleans) she relocated to the Dominican Republic and began a studio practice. Eventually relocating to the Dominican … +

Alette Simmons-Jimenez’s work is motivated by the dynamic relationships between shapes, form, and color resulting from a spontaneous integration of the known and the unknown. Beginning with layering, overlapping, and binding things together, Simmons-Jimenez then physically tears her work apart to see what abstractions are revealed. Her approach uses the traditional elements of color, composition, line, and form to consider human vulnerability … +