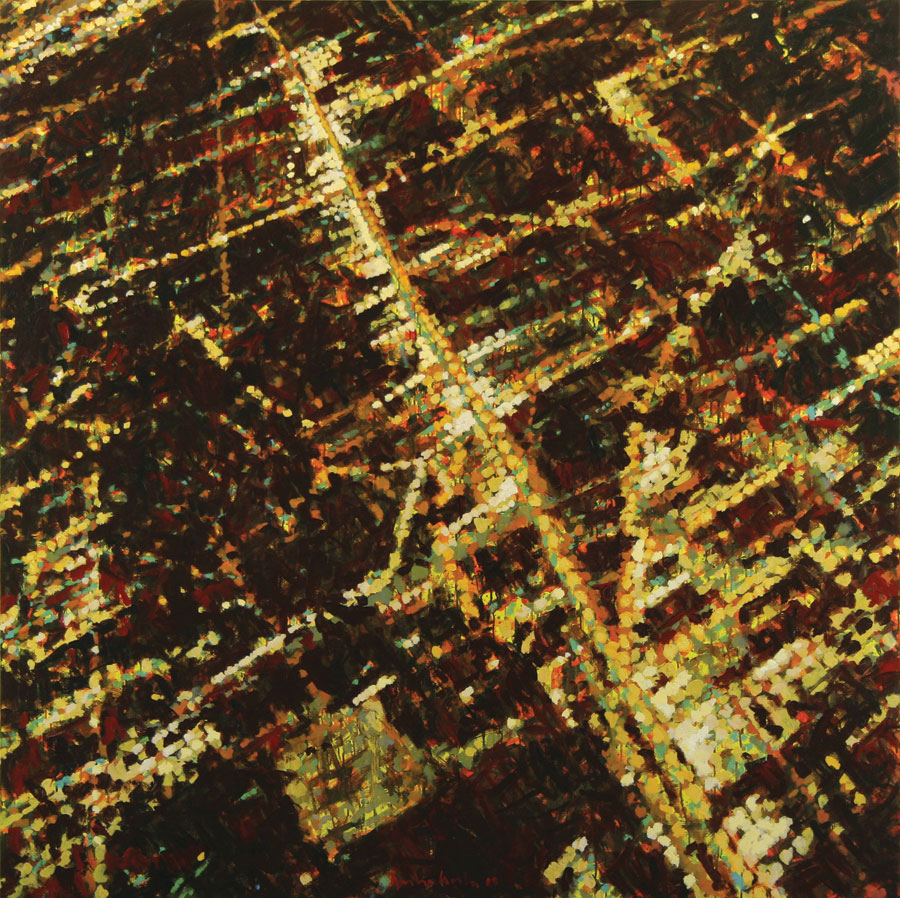 The latest work of two prominent Miami based artists – Gustavo Acosta and Carlos Estevez – has been recently on view at Panamerican Art Projects. The exhibition opened to the public with a reception bursting in positive energy and red dots. Gustavo Acosta is one of the few contemporary artists that has resisted the temptation of making three dimensional works. He is still a ‘classic’ in his approach to art, a traditional painter in the best sense of the word. However, he is not static in his evolution and his recent works are a vivid proof of this statement. He continues focusing his attention on urban surroundings, but changing from detailed architecture to a more abstract concept of city and urbanity per se. To the naked eye, the spectrum of colors in his work have ostensibly changed. Nevertheless, a closer examination reveals his impressive build up of layers searching for an accurate but particular way of representing light. The use of light is perhaps the principal element that states the clear beginning of a new phase on his work. The consequential images are almost abstractions, were cityscapes take shape from the distance. The outcome are these visceral paintings, where the freedom of the act of paint is direct, and the enjoyment of it just an unavoidable consequence.

On the other hand, the Hermetic Garden of Memory Boxes by Carlos Estevez is so far one of the most complex and lengthy projects that the artist has undertaken during his career. Several big black boxes, loaded with innumerable set of objects (found and manufactured), filled up the gallery walls. Each box represents a fragment of the artist’s life. The boxes immediately bring up the concept of a cabinet of curiosities, arguably the origin of collecting. And that is the trend of action here: Carlos’s passion for collecting objects has taken him to incorporate it in his work. His collection becomes his work and the other way around, he accumulates objects that are appealing to him and uses them later on in his assemblages and sculptures, in this case these boxes. Each box is self-contained and basically has three kinds of objects: found, made by him and the objects that previously belonged to him. Very frequently Carlos makes the elements he envisioned as part of the piece, such as dolls; that way he is sure it will be portrayed exactly as he is imagining it.