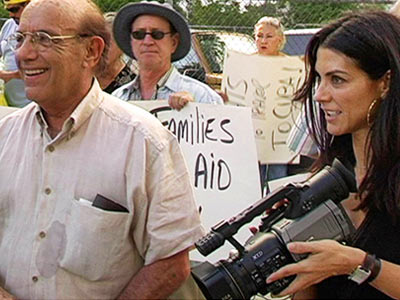 World record-holding artist Conni Gordon will paint. Classic-era movie stars Jayne Mansfield and Charlton Heston turn on the star power in wide-screen epics. Historians will talk about the pioneer days of Miami's art scene and the glitzy Interama dream, and back up their words with images captured on film. Young filmmakers will make short films using hand tools, and video art not seen in a quarter of a century will engage audiences again.

It's all happening during four days in August 2008 as the Rewind / Fast Forward Film and Video Festival carries on its tradition as one of the most eclectic and wide-ranging cultural events in South Florida.

Florida history, generally seen as lighter and more fun than the history of other regions, is front and center at Rewind / Fast Forward. "Invasion of the Historians" combines video screenings with informal talks about historical topics.

This year Helen Kohen will examine Miami's art scene, beginning in its infancy in the 1950's, and Dr. Paul George will tell the story of Interama, a glitzy meeting place of the Americas that was never built. Both programs will feature dozens of film and video clips gleaned from the Wolfson Archives.

Two feature film screenings at the Colony Theatter on Lincoln Road will throw a spotlight on the archival restoration and preservation of vintage films. Frank Tashlin's cartoonish farce ‘The Girl Can't Help It’, starring Jayne Mansfield and Tom Ewell and a slew of mid-century musical acts, including Little Richard, Julie London and Gene Vincent and His Blue Caps, will be screened on August 22nd.

"Major Dundee", a film directed by Sam Peckinpah a few years before his ultraviolent "The Wild Bunch", closes the festival on Sunday night. The film stars Charlton Heston and Richard Harris as Civil War officers – from opposite sides of the Mason-Dixon line – who lead a ragtag private army in pursuit of a renegade Apache war chief. This restored version of the film includes material cut from the original release version in 1965. The new scenes add clarity to the film's storyline and depth to the characters.

Another media star scheduled to appear at Rewind / Fast Forward 2008 is Conni Gordon. An artist and art instructor who holds a number of world records, Gordon taught untold numbers of students to paint and to think creatively through her television shows and personal appearances. She will host a painting party at the Miami Beach Regional Library on August 23rd.

Rewind / Fast Forward will also present "Video Art South Florida," a selection of video artworks first exhibited in 1983, now restored and remastered, at the Bass Museum. Also on the schedule: "Cut, Scratch, Splice and Spool," a workshop for young people who will make films by scratching, bleaching, splicing and manipulating film stock. The films will be screened on the following day. Another event, "Moving The Images: From Archive To Screen" will feature South Florida filmmakers in an informal discussion of making new films using archival film and video materials.

END_OF_DOCUMENT_TOKEN_TO_BE_REPLACED

Pianist Misha Dacic performs at Key Biscayne Piano Festival, acclaimed for its passion and virtuosity, this one-time-only concert will include a wide program. There will also be an introductory talk by Frank Cooper. RACHMANINOFF Elegie in E flat minor, Op.3 No.1 Melodie in E major, Op.3 No.3 In the Silent Night Op.4 No.3 (Arr.Earl Wild) To Her Op.38 No.2 (Arr.Misha Dacic) Prelude … +

The Miami Jewish Film Festival’s 23rd annual Opening Night brings a Film Premiere, Reception, and great Live Music.  Like many survivors of the Holocaust, after World War II, Saul and Ruby moved to America, started families and careers, grew old, and retired to South Florida. For them, settling near Fort Lauderdale could have been the last chapter in their story. But then … +

Highly praised for it impeccable technique, Hungarian musician Daniel Lebhardt won 1st Prize at the Young Concert Artists International auditions in Paris and New York in 2014. A year later he was invited to record music by Bartók for Decca and in 2016 won the Most Promising Pianist prize at the Sydney International Competition. Now he comes to play as a part … +