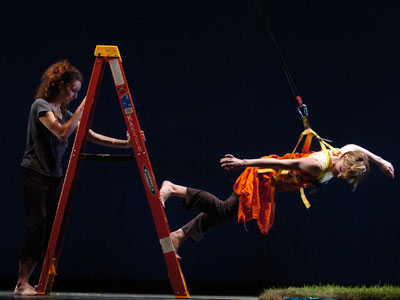 As part of its 2007/2008 season, Tigertail Productions brings Susan Marshall and Company to town for the Miami premiere of Cloudless, her Bessie-Award winning evening-length dance piece at Miami Beach’s Colony Theatre. Cloudless is an eclectic collection of 18 intimate pieces (short-form narratives), ranging in length from 30 seconds to 5 minutes. A master at transforming everyday movement into powerful abstract drama, Susan Marshall has perfected a unique style of emotional storytelling through critically acclaimed dances.

Marshall, who has been awarded both a Macarthur Foundation "genius award" and a Guggenheim fellowship in her long career, created Cloudless for her company’s 20th Anniversary in 2006. On the stage copper-colored leaves fall and snow is caught in a broad gentle updraft as the dancers, dressed in colorful street clothes, move amongst and with each other in a series of vignettes, creating shifting symmetries both playful and erotic. The movement is choreographed to an ebullient score by Jane Shaw that veers from Philip Glass to Tommy James and the Shondells, and is punctuated throughout by sensual video effects. The performance contains brief nudity.

"Susan Marshall is one of the greats of the dance world," says Mary Luft, Executive Director of Tigertail Productions. "Her work is poetic and luminescent, and we are so excited and honored to bring her to Miami with this outstanding production"