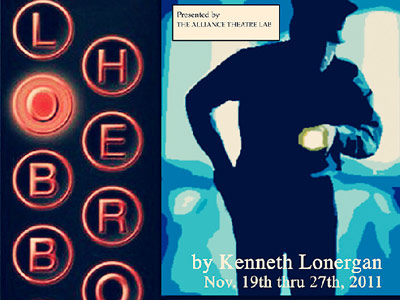 The Alliance Theatre Lab is closing its 2011 Season with Kenneth Lonergan’s critically acclaimed play Lobby Hero. This Outer Critics Circle Award for Outstanding Off-Broadway Play nominee tells the story of Jeff, a luckless young security guard trying to get his life together after being thrown out of the navy.

But the lobby proves to be no sanctuary from the world as Jeff is drawn into a local murder investigation involving his supervisor, a tightly wound young man called upon to bear witness against his troubled brother, and an overzealous rookie policewoman who is in over her head with her unscrupulous hero-cop partner catches his eye.

Performances run Thursdays and Fridays at 8:00 p.m., Saturdays at 5:00 p.m. and Sundays at 2:00 p.m. A special Wednesday performance will take place November 23rd at 8:00 p.m. as there will be no performance on Thanksgiving Day.

Area Stage Company in Coral Gables presents The Ballad of Janis Matthews and the Dodo Scouts, a world premiere musical written, directed, and designed by ASC’s own Giancarlo Rodaz, with music by Rachel Dean. This … +

Andrew Lloyd Webber, the man who brought rock and romance to Broadway, is back with a new heart-stirring hit. School of Rock is a New York Times Critics’ Pick and “An inspiring jolt of energy, … +