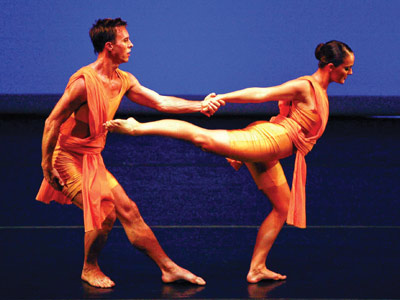 An inherent feature of our existence, light is a source of energy, power, wisdom and grace. As we move from one point to another, we constantly emit gentle, imperceptible light signals that attract similar vibrations. Some people – like dancers, actors, martial arts practitioners, among others – can transform that natural inner light in a compelling creative energy by training their bodies and minds. In performing arts, energy plays a special role, contributing to infuse rhythm and liveliness to the intangible space of communion between performers and spectators. While it is true that we perceive plays or dance performances through the visual field, the experiential account includes elements such as energetic pulsations, beats and additional exchanges that have to be necessarily sensed in a different way.

One of the main secrets of performing has to do with the notion of balance. A dancer, for instance, learns how to modulate his/her energy resources to narrate stories, communicate feelings and signs, without the need of words. Emotions are conveyed through physical moves, arrays of postures that allow the spinal column to get into more flexible states. In many oriental traditions, the assumed term “energy in time” refers to the performers’ ability to make their actions dilate, expand for a long interval, as in Japanese Buyo Dance. Buyo dancers are taught how to ignore the rhythm of the music, an ingredient that comes from outside and that has been created to predispose them to follow an external cadence, instead of obeying their own centers of energy.

Anthropologist Eugenio Barba recognizes the link between the concept of energy and the area of pre-expressivity. Barba, director of the emblematic Odin Teatret based in Holstebro, Denmark, has deeply studied the set of tensions that can be generated within the performer’s body to enhance his/her scenic presence. These tensions are supported by a long series of opposition techniques involving elements like muscle control, weight, direction of the eyes in space, etc. A pre-expressive body produces an extra dose of energy that enlightens the stage by modifying customary nuclei of gravity. Kathakali and Odissi dancers from India are especially trained to communicate this kind of sparkle, a unique light supply that distinguishes them from western performers.

Can this energy be openly expressed through specific figures and shapes on stage? Yes, it can. Celebration of Light by Dance Now! Ensemble constitutes an intermingling of bodies exploring their own invisible light, its significance as well as its capability to adopt (and react to) a sequence of steps set up by a poetic choreography. Staged at the Colony Theater, the performance brings together a notable number of young dancers with whom the audience develops a solid empathic relation since the very beginning. The energy quality becomes the most distinct aspect of the dance routine, making the succession of actions a comfortably fluid journey from start to end.

Directed by Hannah Baumgarten and Diego Salterini, the show fits perfectly in our schedule for a Sunday afternoon. Entertaining combinations of scenes have been designed to comprise lyrical, erotic and humorous passages that embrace the idea of light as an intimate and public material. The stage lights change as the dancers start interacting with each other and with their individual objects. Divided in two acts, the performance invites us to travel through diverse landscapes that do not necessarily follow a coherent logic of thought. Dancers play with the stage settings, forming puzzle-like images that may resemble either an ocean or a living room – where the characters fall asleep. In each scene, the moving bodies project a distinctive type of energy that connect with equivalent pulsations and produce new, more complex sources of light.

The visual structure of the piece contains a concentrated dose of symbolism that reminds us of the theater by Belgian playwright Maurice Maeterlinck. Symbolic plays are not literal and have to be interpreted with care, for the simplest words have obscure meanings that, if properly revealed, may lead us towards a deep understanding of ourselves as individuals and as dependent members of society. “(…) We ought to know something of the little island we live in (…) There is a mountain that no one has climbed and caves that have not been entered to this day,” states Maeterlinck through one of his characters in The Blind. Written in 1890, Maeterlinck’s play proposes an insightful survey of the human soul. Having been abandoned by their priest, twelve sightless people are unable to look out for themselves as they feel disoriented and can not recognize where they are. Creatures that have neither names nor a psychological delineation.

Likewise, Celebration of Light intends to recreate allegorical ambiances where the dancers’ physical actions have concealed meanings. No individual characters are developed to the extent that the cast assumes simultaneous roles and unlimited positions throughout the entire performance.

The choreographic design rests on an assemblage of coordinated easy moves that explore asymmetry, assorted dynamics, various speed levels, and points of spatial ruptures. Motionlessness constitutes another component for us to deal with the figurative issue of light. In several segments of the composition, the dancers appear immobilized on stage, and their energy is channeled by other subtler methods, emphasizing the (essential) content of scenes. “There is beauty in simplicity,” says a Chinese proverb, which might be considered an implicit message of the show. Ultimately, Celebration of Light by Dance Now! Ensemble stimulates our imagination and encourages us to safeguard our own interior spark.

This full-scale production, set to the music of Pyotr Tchaikovsky and based on German legend, follows a heroic young prince as he works to free the beautiful swan maiden from an evil spell. The legendary … +

The Alouettes Dance Company Program focuses on educating young people to strive for their personal best in anything they want to accomplish. To be a member of the ACD program is a privilege that dancers … +