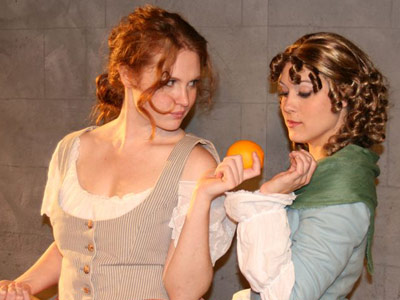 It is no secret that a woman’s place in our society is constantly evolving through the efforts of strong and relentless pioneers. This evolution may not always be a fast and obvious improvement, but nonetheless, it is an evolution. Women’s suffrage, the civil rights movement, and the progress of the working-woman are prevalent in the discussion of women’s issues of yesterday, today, and tomorrow. The arts were no exception to the patriarchal rules of the past. The first women to act on a stage endured ill treatment and fought the constant struggle to be taken seriously in their craft. The story of these women of the arts is told in a play by April De Angelis called Playhouse Creatures. This comedic story of the not so comedic circumstances of a woman of the stage, produced by the Women’s Theater Project of Ft. Lauderdale’s Sixth Star Studios, is a light account of the first women of the English Theater in the times of Restoration London.

The story of these five women may be all too familiar to women today, as they were granted luxuries and certain rights as long as they were willing to use their sexuality to get it. The cast of five incredibly talented actresses that perform in this production of Playhouse Creatures keep the audience engrossed in their individual tales: the theater owner’s wife, a woman whose very first performance was disguised as man, faces the harshness of growing old at a time where beauty is all a women depended on to get ahead or stay ahead, the “established” young actress whose affair with a womanizing earl marks the start of her demise on and off the stage, two ambitious young women wanting to make something of themselves by any means necessary, and the old and faithful backstage seamstress who tells it like it is.

These five women transmit their enthusiasm and passion for the story to the audience through powerful monologues and their convincing portrayal of the struggling women.

Directed by Genie Croft, this production of Playhouse Creatures uses a small unassuming stage to portray De Angelis’ piece leaving much to the imagination of the audience for lack of actual scenery changes and though some scene transitions may confuse the audience a bit, The Women’s Theater Project does the best it can with its limited funds. The Women’s Theater Project is on an admirable mission to stay open and true to their craft. “The show must go on!” They seem to chant, as this extremely under funded little theater manages to stay afloat and continues to bring wonderful stories to life.