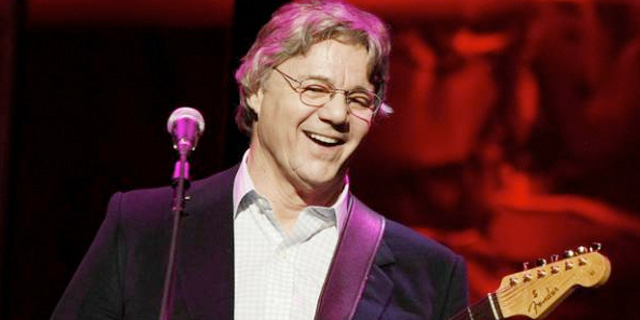 The University of Miami Frost School of Music presents blues-rock legend Steve Miller as part of the 2012-2013 Stamps Family Distinguished Visitors Series. Miller will present a lecture on February 19 and also appear in concert with the Frost Concert Jazz Band on February 20.

Steve Miller is one of rock music’s all-time greats. The Steve Miller Band has sold more than 30 million records in a career spanning more than 40 years. Defining classic rock, in 1976, “The Joker” was Miller’s breakthrough hit, going all the way to number one. “Take the Money and Run” was the first of six consecutive smashes – “Rock ‘n Me,” “Fly Like an Eagle,” “Jet Airliner,” “Jungle Love,” and “Swingtown” from the multimillion-selling Fly Like an Eagle – that kept the Steve Miller Band in the Top Ten.  In May 2010, after a 15-year hiatus, Bingo! was released followed by Let Your Hair Down in 2011.  An arena concert veteran, Steve Miller continues touring. Recent special appearances include the opening of “Guitar Heroes: Legendary Craftsmen from Italy to New York,” at the Metropolitan Museum of Art, NYC, and the gala opening of the new “Austin City Limits” facility.

The free lecture by Steve Miller will be held at 3:00 p.m. on February 19 in Gusman Hall on the University of Miami Coral Gables campus. Miller will share personal anecdotes, including those regarding his humble start, his rise to fame, and what he feels is important for the success of today’s young musicians. Admission is free, but a ticket is required. To reserve, call 305.284.4940 or visit music.miami.edu/events.

On February 20 at 8:00 p.m., Steve Miller and the Frost Concert Jazz Band will perform a concert at the BankUnited Fieldhouse. They will perform classic blues tunes and some of Miller’s biggest hits arranged by Frost students specifically for Miller with big band.  For more information or to purchase tickets, please call TicketMaster at 800.745.3000 or visit music.miami.edu/events.

From Appalachia to Tang... +

The pairing of guitar and flute has long inspired delightful music, at once earthy and delicately translucid. An evening featuring Robert Beaser’s Mountain Songs, based on Appalachian music; Astor Piazzolla’s Histoire Du Tango, a tango … +

Marian Anderson’s debut at the Metropolitan Opera House in 1955 broke through the company’s longstanding Jim Crow practices. Carol Oja, Professor of Music at Harvard University, revisits the campaign waged by the NAACP and Anderson’s … +

“Arturo O’Farrill’s Afro Latin Jazz Orchestra is one of the best jazz orchestras in existence, a powerhouse outfit whose precise section work is enhanced by thrilling soloists“ The New Yorker O’Farrill’s debut album with the … +