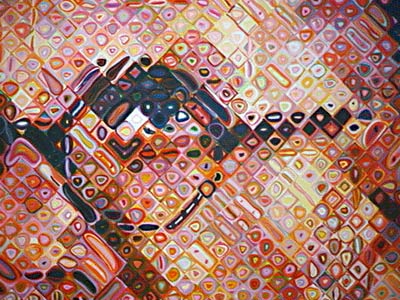 The exhibition is concurrent with Akron Art Museum’s “Familiar Faces: Chuck Close in Ohio Collections”. Do not miss the Public Symposium “Up Close and Personal with Chuck Close’s Friends” organized to celebrate the two exhibitions on October 11th, 2009. Photorealism as an art movement developed in the United States in the late 1960s-early 1970s. Within this movement Chuck Close’s intimate, deceptively straightforward self-portraits and portraits of his friends and family have become an indelible part of American art. His paintings, photographs, and prints mark an intersection between representation and abstraction that is simultaneously of the moment and timeless.

Chuck Close (B. 1940) received his B.A. from the University of Washington in Seattle and afterwards attended graduate school at Yale University. He briefly lived in Europe on a Fulbright grant before
returning to the United States to teach art at the University of Massachusetts. It was at this time that he started working from photographs. Since then, Chuck Close has participated in countless group exhibitions of international significance as well as more than one hundred and forty solo exhibitions around the world. He has been honored by many cultural institutions and has received multiple awards, including: a National Endowment for the Arts Fellowship (1973); The International Center of Photography Infinity Award for Art (1990); the Academy Institute Award in Art from the American Academy and Institute of Arts and Letters, New York (1991); the New York State Governor’s Award (1997); the National Medal of Arts (2000); and gold medals from the American Academy and Institute of Arts and Letters (2004), the American Academy in Rome (2004), and the National Arts Club (2005).

Recognized as one of the preeminent artists of the Post-war era, Close has embraced a variety of media throughout his career in order to explore art making at its most fundamental levels. Commonly choosing friends, family, and himself as subjects, Close’s portraits also include cultural and political figures. Portraiture was given up-to-the-moment relevance by Close’s monumental, painted heads. His meticulously crafted portraits were always regarded as being on the cutting-edge of contemporary art, which was focused on concepts, systems and process rather than representation and the skill of the artist’s hand.

Close’s paintings are labor-intense and time-consuming, and his prints are more so. “Virtually everything that has happened in my unique work,” he declares, “can be traced back to the prints.” While a painting can occupy Close for many months, it is not unusual for one print to take more than two years to complete, from conception to final edition. He also has described himself as “an artist looking for trouble” because pushing the limits of various techniques gets him in trouble and extricating himself from a technical corner becomes an essential catalyst to his creativity. Prints often provide the arena in which he can work out solutions to the aesthetic problems his restless imagination poses. Few artists have experimented with as many different media: oil, acrylic, inks and graphite on canvas, handmade paper with shaded paper pulp, spitbite and aquatint with softground etching, digital pigment printing, linocuts, screen-printing, ukiyo-e tradition woodcut, Polaroid photography, traditional color photography, and even rubber stamp and tapestry.

Self-portraits take a central place in Close’s work. Over many years, he has been taking photographs of his own face every year and translating them into large paintings. This reflects changes in hairstyle, beard, and eyeglass frames, as well as aging, worldview, and attitude toward life. It is fair to say that Chuck Close will leave a legacy to the world of the greatest visual autobiography since Rembrandt.