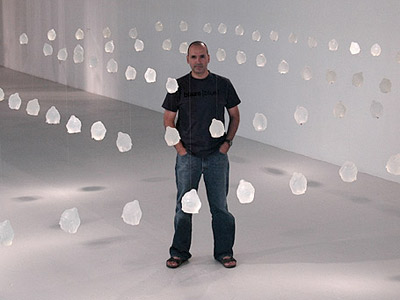 It is hard to find the right words sometimes, isn’t it? There have been about a thousand instances in which I knew exactly what I was feeling, exactly what was driving me, yet my brain was incapable at that specific moment of producing a phrase that would accurately describe the sensation.

Perhaps it is for this reason that when someone actually achieves a clear, accurate, and fair expression of a feeling that we may share, our minds are just completely blown away. More often than never, this person is an artist. Maybe the reason our brain’s hard drive crashes when trying to process clear and coherent thoughts to express an emotion, a principle, or a frustration in a single moment, is because the complexity of it may require a longer process of extraction – the development of a concept, the building of an idea, the process of a clear translation of an intangible thought. An afternoon with artist Andres Michelena inspires my analysis of clear expression as his work touches on unarticulated thoughts that he, as an artist, has taken the time to extract and translate into matter.

Michelena is an artist that inspires focus on the here and now and encourages the immersion of yourself into his work and into its moment. In a piece called Buddhama, Michelena creates an image of our current president with the use of ink. A clear portrait of his face to the naked eye is in fact composed of small leaves. Michelena’s execution of the portrait consists of working a small stamp and its ink into shapes, shadows, and contours with the final result of an image, a face. Above President Obama’s portrait, a TinTin from the popular comic strip The Adventures of TinTin hovers and advises the Commander and Chief, “Careful, Captain. This is rather tricky.” Everything in this piece is representative of a thought – the “canvas” is recycled Chinese newspaper, the stamp is a hopeful leaf, his expression is serene, confident, Buddha like. The concept behind the piece is one of optimism, one of a dream, inspiration, and hope, phrases that are also present above the portrait, but it is also one of caution. Promises of growth and promises of change have been instilled in us by one man who some believe can do it all; great expectations as the caricature above him says, “can be rather tricky,” and usually lead to great disappointment.

In a similar realm of political satire, Michelena tackles the ideologies of Hugo Chavez, present leader of his native Venezuela. This piece, called Get yourself over there (Revise-Approve-Changes-Required-Cancel-Shred It) (Ponte Pa’lla!), depicts the formation of Chavez’s face by the same technique of stamping we saw in “Buddhama”. However, this portrait is not composed of hopeful leaves, this portrait is composed of a single stamp that reads “Revise-Approve-Changes Required-Cancel-Shred It”, an expression of the contradictions found in the leader’s socialist efforts. Two more characters from The Adventures of TinTin, Thompson and Thompson disguised as Chinese warriors, make an appearance in this piece against a red background and a bubble overhead that reads, “Don’t look now, but something tells me we’re being followed.”

Michelena’s composition of politically, ideological or satirical images and caricatures with a happening-now approach is one that we can value with a look back at his formation. Michelena was born and raised in Venezuela (1963), a country that has always endured political controversies and whose citizens, big and small, have always had a shared awareness of its system. Although his studies began in the field of architecture, after a few semesters, Michelena ventured into the Ventrillón drawing workshop at the Universidad Central de Venezuela. At the time, the workshop was lead by renowned caricaturists Pedro León Zapata and Ramón León.

After participating under their direction, an inspired Michelena decided to fully commit to the study of Fine Arts entering the Instituto de Arte Federico Brandt and graduating in 1989. Since then, the artist explored different mediums including drawing and painting and participated in several group and solo exhibitions. Michelena moved to the United States in 1999 and began an exploration of different forms, techniques, and outlets for his work – the move to the United States triggered a desire for something new. Here, he began his discovery and exploration of conceptual art, installation, and more recently, video art.

Michelena’s conceptual art focuses on the spiritual nature of a question, an intrigue, a principle. A man of many thoughts, of many ideals, a Zen practitioner who has mastered a unique form of thought-to-matter translation, Michelena takes the concept of religion and applies it to many of his communicative pieces. His purpose is not to push religion, nor is it to condemn it, it is simply to put the subject in a light in which it is clearly displayed for the admiration or sometimes even critique of an objective spectator.  An installation called Awa, which means “bubble” in Japanese, from his Impermanence (2007) show, consists of 108 glycerin soap Buddha heads. Each Buddha head, suspended from above, holds an original message on a thin strip of paper. One of the purposes of this incredible labyrinth-like installation is for the spectator to purchase an individual Buddha head and actually use it until the message has been revealed to them.

This is exactly the kind of concept Michelena enlightens us with: we buy art that holds a message that may or may not change our lives, yet our curiosity and our desire for spiritual guidance or meaning pushes us to participate, to interact and use the soap to the point of a complete dissolution that will leave us with a thin strip of words – Michelena has made us part of the process. In perfect sync with the Zen principle of impermanence, the Buddha head, the main piece, will not remain once the process has been complete – it was and now it is not.

Ooppss!! another 2007 installation by Michelena bases itself on the misuse and misinterpretation of historic and sacred texts. This installation focuses on the potential for contemplation and critique we spoke of before. The artist’s desire for our involvement and understanding of the piece lies in our acceptance of such misuse and our lighthearted response to the fact that there is error everywhere.

The installation consists of three acrylic boxes lined up against the dark wall of a semi-confined room. A frosted glass covers the text within the boxes making the clear Ooppss!! engraving the spectator’s only peek inside. This hidden text is composed of verses from the Old Testament, the New Testament, and the Koran. In the center of the semi-confined room, a large sphere full of smoke is used as a surface onto which the text fragments from the boxes are projected. The sphere is symbolic of the human mind and nothing is clear within a cloudy mind. It is only when the smoke within the sphere dissipates, when the clouds within our minds clear, that the messages are able to penetrate the surface and stand clear and coherent within the sphere, within our minds.
Whether he is working with stamps, paint, video or installation, Michelena is an artist with true versatility. He speaks of his passion for exploring different medias and constantly finding new and different ways to resourcefully express his concepts. Michelena does not identify himself with a specific media, specific material, or a specific audience.

“The medias I choose have to do with the fact that they are the best for what I wish to express. Sometimes stamps, sometimes video, sometimes glass or projection or installation. I do not limit myself to any specific one,” he says.

Michelena has participated in international fairs such as Balelatina (Basel, Switzerland), Photo Miami, Art Miami, Arteamericas, CIRCA (Puerto Rico), FIA-Caracas, LOOP (Barcelona) and British Art (London, UK) among many others and is currently represented by Hardcore Contemporary Art Space in our own Wynwood. An incredible twenty-year career and plenty to show for it makes Andres Michelena a truly successful translator of thoughts.

Liu Shiyuan’s work probes the results of gaps in communication that arise from changing technologies as well as from transcultural exchanges. Through images in videos, collaged photography, and other mixed media work, she interrogates in-between … +

Named after the thin strip of land that runs between Panama and Colombia, the exhibition situates the viewer within a history that stretches from European abstraction to the visual culture of pre-Columbian Peru. Much as the Darién Gap … +