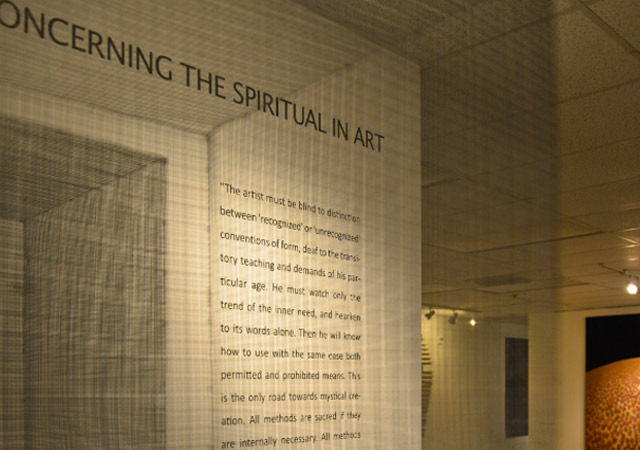 A little over a century ago, Wassily Kandinsky announced the consolidation of a new abstract language, originating in inner necessity, in spiritual need. André Malraux later reaffirmed that conviction through a prediction which, up to the moment, appears to have been erroneous: “(Art of) The 21st century will either be spiritual, or it will not be.”

At a time when a large part of art dances to the beat of commercial cynicism, Aluna Art Foundation recently inaugurated its alternative space for curated exhibitions with a show that rescues the title of the book with which Kandinsky’s threshold concepts opened up the doors to a new understanding: “Concerning the Spiritual in Art” (1911).

The works exhibited in this show reflect a human aspiration that is impossible in principle: to provide a form to that which is formless. To represent the unrepresentable. What renders them valuable is the invention of languages which, in different ways, bring the dialogue with the invisible to the domain of the senses and of thought; the attempt to contain in a visual dimension the relationship of the being with transcendence.

Although there is a wide formal diversity in the media employed, all the works constitute an approach to a dialogue with infinity, and each of them incarnates a search for unity not only between individual expression and the universal unconscious, but between art and life: each invited artist engages in a particular form of contemplation, or, in other words, is a seeker of that ultimate “unity” which is the base for forming words such as “religion” (from the Latin “re”, again, and “ligare”, bind), in its wider sense.

“The spiritual life,” Kandinsky wrote, “to which art belongs and of which she is one of the mightiest elements, is a complicated but definite and easily definable movement forwards and upwards. This movement is the movement of experience. It may take different forms, but it holds at bottom to the same inner thought and purpose.”

“Concerning the Spiritual in Art” gathers together thirteen artists living in Miami &minus or who have been linked to the city &minus who share the wish to make the invisible visible, and the knowledge that each work transforms the space and the reality of the beholder.

From a vision of the eternal photographed in a fleeting instant to the experience of the hand that hits the metal with the concentration of a prayer, or that pretends to play on the surface of silk imitating the movement of retreating waves; from the combination of the trace of a line that synthesizes a spiritual gesture and the artisanal work in a loom to the attempt to unify, on wood or canvas, images of the timelessly sacred and the historic.