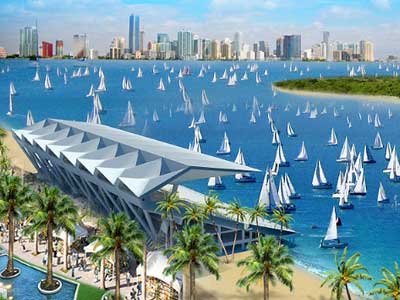 DawnTown, the annual international architectural competition, announces that the awards ceremony for the Miami Marine Stadium Floating Stage Design Competition will be held on May 2nd at the Rusty Pelican restaurant on Virginia Key. The event will feature a display of all of the contest entries as well as the announcement of the winner and semi-finalists. This year’s competition seeks creative architectural ideas for the design of a floating stage to complement the Miami Marine Stadium, which has become an internationally recognized icon – now slated for renovation.

Originally built in 1963 for boat racing, the stadium has also hosted concerts, television shows, political rallies, and boxing matches – all from a floating stage that was towed directly in front of the stadium. The Miami Marine Stadium was shuttered by the City of Miami after Hurricane Andrew in 1992 and has remained closed ever since.

In 2008, a new organization called Friends of Marine Stadium was formed under the aegis of Dade Heritage Trust, Miami-Dade County’s foremost historic preservation organization. The group has successfully focused national and international attention on the structure resulting in the stadium being now considered an architectural gem. Tickets for the event can be purchased by contacting Dade Heritage Trust at www.dadeheritagetrust.org no later than April 25, 2011.

The 1917 Russian Revolution ushered in a relatively short-lived era of experimentation and idealism in the visual arts. Including some of the most iconic images in the history of graphic design, Constructing Revolution will present … +

The first design exhibition scheduled in the MDC Museum of Art and Design after its April 2018 reopening, By the People: Designing a Better America will explore the challenges faced by urban, suburban and rural communities in … +