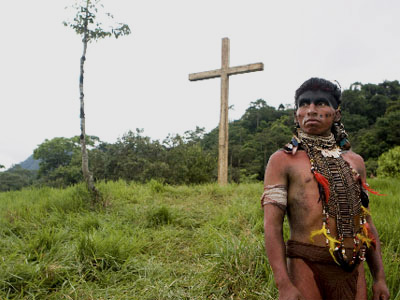 Even the Rain (Tambien la lluvia), a film directed by Iciar Bollain and written by Scottish screenwriter Paul Laverty, is about, in the director’s words, “resistance and friendship. It’s a personal journey … an adventure undertaken by characters which brings the past into the present.”

The story intertwines Columbus’ arrival in the Americas with the making of a film; it mixes the Spanish crown’s exploitation of gold in the 16th century with the fight for water in Cochabamba in the year 2000. The film takes us from the fiction of a period film to the reality of a film set in a small Bolivian city. And from that reality to another which is deeper and more dramatic, that faced by people with practically no rights, prohibited by law from collecting even the rain.

But “Tambien la Lluvia (Even the Rain) does much more than compare historic events. It transcends the detail and delves into something much deeper and more universal. Deep down it’s a story about loyalty, camaraderie, and empathy. It’s essentially a tribute to friendship. Costa, a cynical film producer, and Sebastian, a young and idealistic director, work together on an ambitious project they’re planning to shoot in Bolivia, a film about the arrival of the Spanish in the Americas that highlights their brutality and the courage of several members of the Catholic Church who fought with words against the colonizers’ swords and chains. Father Bartolome de las Casas and Father Antonio Montesinos were the first radical voices of conscience against an Empire.       But Costa and Sebastian can’t imagine that in Bolivia, the location they’ve chosen to represent Santo Domingo in their film, an explosive challenge awaits them. The Bolivian Water War breaks out (April, 2000), shattering Sebastian’s convictions and Costa’s detachment and forcing them to make an emotional journey in opposite directions.

Filmed in nine weeks in Cochabamba, Bolivia from October to December of 2009, “Tambien la Lluvia (Even the Rain) was produced by Morena Films and co-produced by Vaca Films (Spain), Mandarin Cinema (France) and Alebrije Producciones (Mexico). It’s a film about contrasts which intertwines Spain’s eagerness to colonize and enslave thousands of indigenous people in the 16th century with the resistance of thousands of people against their water being privatized in the year 2000. Three men crash head on with different ambitions. The film is dedicated to the memory of radical US historian Howard Zinn who died at the beginning of 2010. His eloquent book “A People’s History of the United States” has sold in its millions. He was a personal friend of Paul Laverty and helped him with the research for this film.