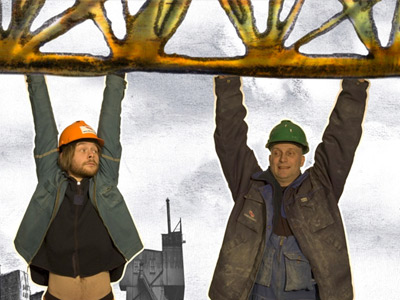 A cat and a mouse carry on a dysfunctional relationship in a futuristic landscape. A Chinese monk sets out on foot with a tiger during the Tang dynasty and happens upon the giant Buddhas of Bamiyan. Two blue collar workers dissect the meaning of “normal” life, as the world crumbles around them. A box of matches succumbs, to their detriment, to the appeal of a cigarette.

Four people recount their various encounters-triumphant or terrifying, euphoric or down-to-earth-with an unforgettable rite of passage. The shorts featured in Nine Nation Animation are all award-winning selections from the world’s most renowned festivals, including Cannes, Berlin, Annecy, Clermont-Ferrand and others. The Village Voice says that Nine Nation Animation “proves that there’s a lot more to the animator’s art than either the cutting-edge ultra-realism of Pixar or the flat functionality of sitcoms like The Simpsons” and Variety calls it “a filling multicourse meal for the discerning grownup toon fan.”