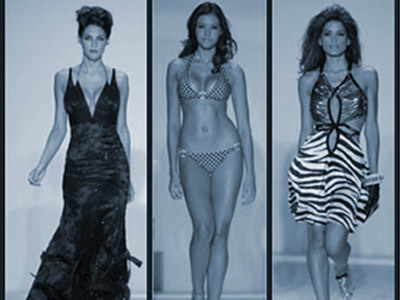 Funkshion: Fashion Week Miami Beach celebrates its 10th season with one of the most impressive line-ups in recent years. The state of the art fashion pod will be built on the sand at 11th Street and Ocean Drive in Lummus Park in Miami Beach. The venue will feature three venues with a large court yard for sponsor activations in the center of it all. The court yard and main fashion venues will be real grass as Funkshion strongly supports Eco movement.

In the days following opening night, Funkshion: Fashion Week Miami Beach will move locations to the Setai Hotel to host the world renowned designer Fisico by Cristina Ferrari from Milan Italy . Shows will take place at the Setai Hotel with an amazing runway built directly over the pool.

Other highlights in the tents on Ocean Drive are Justin Timberlake’s clothing line, William Rast, the debut of Russell Simmons new Argyle line, as well as Puma, Caroline D’ Amore, Le Jean De by Marithé Francois Girbaud. Closing nights show in the tents will feature Heatherette. Main runway shows to take place at the tents built on the sand at 11th and Ocean Drive (Other locations listed on schedule) The main lobby will be open to the general public from 6:00 – 10:00 p.m. from March 26th to 29th.